GURPS: After the End and Gamma World, 2nd Edition

I've been reading Wastelanders, the first book in the new After the End post-apocalyptic line for GURPS. That reading prompted me to go look at the first post-apocalyptic game I (briefly) played, the excellent Gamma World 2nd edition. I've almost entirely been ignoring the rules, and instead focusing on the sample setting, the Allegheny of Gamma Terra around the Deathlands of Pitzburke.

It's an interesting setting: a smattering of primitive tribal groups, divided into four rival clans in north and east, and a slightly more urban central kingdom. Various threats are emerging from the edges of the map: recurring raids by Red Death murder-hobos to the west, incursions of mutated animals from the west and south. Many of the ruined cities and towns are controlled by one faction or another, but Pitzburke itself isn't controlled by anyone and other cities have been abandoned to various types of mutated wildlife.

One of the first things I did was annotate the map a bit to show the clan, kingdom, and cryptic alliance borders, and then I went back and noted which Deathlands have specific wildlife threats associated with them. I also changed the black roads to medium grey, so they showed up a bit better. I'd like to clean up the map more, by cleaning up the text boxes and replacing the faded black hex markings with an off-white or something. Still, I think this map is a little more useful than the default map. Kellri has remastered the map, and I'd love to get something that looked as good as that, but ironically his map with clean black hexes is less useful for my limited photoshop skills because I can't easily select the hex markings or the roads. 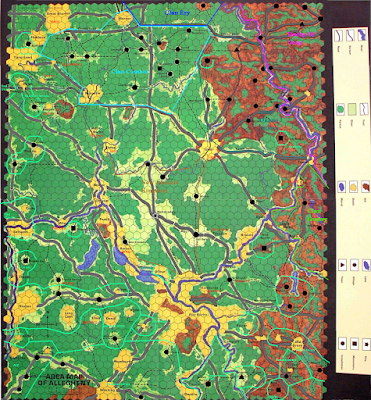 Because I'm a huge nerd, I've also gone through and done some number crunching on the population numbers of the Allegheny. (I would have thought that someone else has done this before me, but if so, it hasn't been published). I assumed average numbers for the variable populations listed in the text, and got the following values for the total populations of the various clans, kingdoms, and Cryptic Alliances:


I think it's pretty obvious that no one did this at the time the setting was written, and honestly, I can't blame them because it's kind of thing that is easy if tedious with a modern computer and extremely tedious and difficult with whatever computer they would have had at TSR in 1982.

The numbers are a bit ridiculous: New Arndale has more than a third of its population acting as soldiers, which is nearly impossible, and the Gany Duchy and Oclare Empire are apparently in an extremely bitter war with all of their reserves called up and deployed. On the other hand, many of the villages are apparently subsistence farmers of no particular note: the Clan Cambol "capitol" has a population of less than 300 people, not even large enough to have a daily market according to GURPS Fantasy.

There are some other bits of weirdness buried in the text, mostly relating to Clan Cambol: despite consisting of some 2000 primitives who can't even make plate harness, they field two companies of mercenaries at Rog and Unity with higher tech equipment. That's roughly 10% of the Clan's entire population (and a pair of "extremely rare" Defense Borgs) hired out as mercenaries to defend a pair of towns that aren't particularly threatened.  You'd think Clan Cambol could put those troops to better use someplace else.

As a side note, the area on the map is roughly 50 miles by 60 miles, and the total population (including intelligent mutant animals like Badders and Menarls) of the area is roughly 17000, meaning the population density is around 6 sentients/square mile. That's basically unpopulated, which matches the map with large areas not even claimed by anyone, but a GM could quadruple or even quintiple the listed populations without making the map the least bit crowded. Changing New Arndale's population from 3100 to 13000 moves it nicely from "barely a town" to "post apocalyptic city".

Suitability for an After The End game?

So my purpose in reading this stuff, cleaning up the maps, and crunching these numbers was to use this for a GURPS After the End game. And that raises the question, how well does the Pittzburk Allegheny work for ATE?

It's hard to say, because ATE: the New World hasn't been released yet. Desired world details can only be inferred from Wastelanders, but from what is available, the Allegheny doesn't match well with ATE. Wastelanders assumes that GURPS TL4 and less is freely available, but GURPS TL4 is Gamma World TL2, and all the tribal lands in the Allegheny are less than that. Gamma World also seems much more gonzo than the implied ATE setting: there are lots of critters that can perform laser eye blasts or deadly sonic attacks in Gamma World, while ATE's attack mutations are limited to razor claws, bone spurs, and non-damaging shots that stun or knock over.

Aside from that, the Allegheny has some inherent problems as a campaign setting. The clans are fiercely xenophobic and most will kill outsiders on sight. The central New Arndale kingdom is a police state that doesn't allow anyone to pass through the kingdom (traders can travel from two villages to the capitol and back, but not go through) which makes it hard for people to move around the map. Even the southern lands around Pitzburk, which are supposed to less organized and less hostile, have xenophobic communities that will kidnap travelers and force them to recover artifacts from irradiated ruins.

Thinking it over, I'm not sure any of that is really a problem. Toning down the xenophobia is easy, and requires just ignoring some statements in the location descriptions. Giving New Arndale a slightly more enlightened travel policy is trivial. The tech level differences can be ignored: I don't really think that letting people buy plate armor in Clan Cambol territory is going to break the game, nor will having Newton or New Arndale be capable of making early cartridge repeaters such as the Spencer rifle. I'm already inclined to have my ATE game have much more gonzo mutations and psionic powers: I understand that the Rev wrote the series to accommodate people who wanted to play Mad Max, and that's a good thing, but I want Gamma World.

I'll probably write up some more of my changes to the Pitzburk Allegheny over the next couple of weeks, especially after ATE: The New World is released. I might also create some templates or advantage packages for the Cryptic Alliances and/or some of the iconic Gamma World creatures, plants, and robots.

Email ThisBlogThis!Share to TwitterShare to FacebookShare to Pinterest
Labels: After the End, Gamma World, GURPS 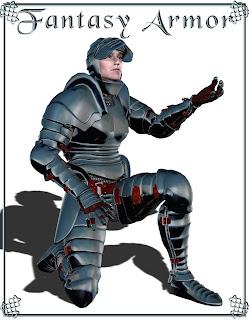 Basically, I'm still thinking and trying to write about GURPS, but I'm nerd-wrestling a bunch of numbers without much success.
Posted by Mark Langsdorf at 5:48 PM 1 comment: