+Douglas Cole has a Melee Academy article up on Gaming Ballistic about Combat Grappling and Waits. A lot of what he writes is interesting and useful, but there's some advice that's a bit sub-optimal. There are good ways and bad ways to use the Wait maneuver in GURPS to allow a grappler to attempt an attack on a foe, and people should be aware of the good ways.

This article uses some mechanics from GURPS Martial Arts. It's an excellent book and an excellent set of additional rules for melee combats. 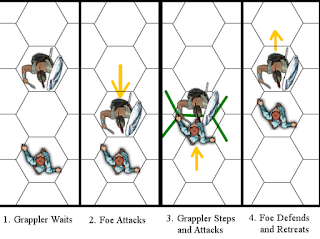 Doug describes a simple Wait system for grapplers: Wait until the foe moves 1 hex away, and then step into close combat and attempt a grapple. As Doug himself notes, this isn't a very good system: the grappler's foe can attempt to Dodge and Retreat, at a minimum, and depending on his weapon, may be able to Retreat and Parry. And no matter what the grappler's foe does, he'll be able to use his shield DB to defend himself since the grappler attacked from the front.

Assuming two foes with roughly equal skills in the 14-18 range, and the attempted grapple victim carrying a DB2 medium shield, the system method succeeds about 1 time in 5. While this isn't any worse than other comparable combat actions, it could be a lot better.

Closing the Distance (The Better Way)


This is a more complicated system, but it works better.

An important point here is that in Step #3, when the grappler feint's, the foe cannot attempt a Retreat or other action to reposition himself. It's also important that the grappler's allies do not attack the foe between the grappler's sidestep and the grappler's attack, since in doing so they would give him the opportunity to Retreat and probably move to a less disadvantaged position.

Responding to an Attack and Fly Out

Sidesteps Are Not Just for Grapplers


This nasty little trick is not just for grapplers. Anyone with either a good Dodge, an excellent Active Defense from skill or shields, or a fencing Parry can attempt it with a reasonable degree of success. Characters with a low Block and Parry, a low Dodge, and a non-fencing weapon probably want to preserve their Retreat to back away at +3 to Dodge or +1 to Block or Parry.

The biggest problem with the Wait and Sidestep combination is that if the grappler's foe has allies, the grappler has generally moved away from his own allies and closer to his enemy's allies. The grappler has to be careful about not opening his own flank or rear to his foe's allies. If the grappler and his allies outnumber their foes, this can be an excellent trick for establishing a grapple or other damaging attack on an unwary and unfortunate enemy.

Other contributions in this week's Melee Academy series on Waits and Timing can be found at:

Posted by Mark Langsdorf at 1:26 PM