Mecha Against the Giants Session 8

One thing I'd always intended to do with the Mecha Against the Giants game was to run a dungeon crawl. In keeping with the escapist and awesome tone of the game, it didn't have to be a particularly long or difficult dungeon crawl, but there was always going to be one. Last night, we got started on crawling that dungeon.

Shortly after the end of the last session, I wrote the players an email explaining the premise: thanks to a faulty sensor in the mechas' self-repair systems, they needed to acquire a lot of aluminum and titanium. The natives knew of an old dwarven vault that had ingots of both, but it was guarded by golems and in an abandoned mine. The mine had been overrun by cave horrors, which the D&D-savvy players recognized as troglodytes.

Except these troglodytes emitted a gas that wasn't just nauseatingly stinky, but also highly flammable. The natives couldn't clear the mine of the troglodytes, because carrying open flames into the caves tended to kill them, and they couldn't stand the stench of fighting the troglodytes in close quarters anyway.

Fortunately, the pilots had IR vision from their armored pilot suits, LED lights on their helmets that wouldn't ignite the methane, filter masks that would stop the stench, and lots of guns. Although they were a little worried about the golems (hypothesizing that they were some kind of robots), they figured they could take the rest of the mine with no problem. A couple of them picked up shields from the TL2 native stock, and they descended into the mine.

One of the quirks of Mecha Against the Giants is there isn't much magic in the world, but there is a little. To reinforce that point, I had the friendly oracle give some vague warnings: beware the floors and beware the dead. The pilots weren't too sure what to make of that at the time, but at least some of that advice turned out to be useful.

We started play with the pilots well into the mine and established their current weapon load-outs. Everyone had a rifle, a pistol, a superfine combat knife, and most people have at least one other melee weapon: the ultra tech utility axes or the duelist's antique daisho. Everyone but+Kevin Smyth's duelist started with their rifles ready, and I introduced them to the first set of troglodytes.

A combat between a half-dozen stone age primitives armed with flammable stink auras and a fire team of 23rd century infantry is pretty guaranteed to go poorly for the primitives, and this was no exception. The primitives were scented, people snuck around around until the primitves were spotted, and then violence occurred. Unfortunately for the pilots, the troglodytes had been wandering this section of the mine for a while, which meant the air had plenty of methane but not too much. And the muzzle blasts of the guns had a 1 in 6 chance of setting off the methane. Because I'm a nice guy, I let the players roll to see if the methane went off. Which it did, just about every time they fired their guns, enveloping them in clouds of flame. 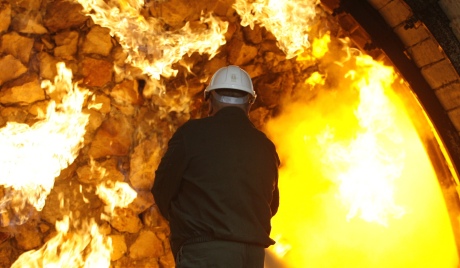 Fortunately, their piloting suits were mostly fireproof, but unfortunately for them, mostly doesn't mean completely. Some high damage rolls and a couple of the pilots were lightly cooked, and every started dropping rifles for their backup melee weapons. Except for +Theodore Briggs gunslinger, who for some reason decided to pick up some smouldering javelins from the well roasted corpse of a troglodyte. Attempting to throw those javelins at the second wave of troglodytes were enormously successful, in the sense that they ignited the air again and wiped out the troglodytes. The pilots who got burnt again (I let +Uhuk of the Guard roll her own damage, and she used her Luck, and didn't roll less than 8 on 2d6-1 on 3 tries) were a bit less impressed by this tactic.


This entire sequence was hilariously funny to me, and I think everyone did enjoy it a lot. The change from the overconfident pilots, casually dispatching the primitive troglodytes, to the frustrated and annoyed pilots trying to convince +Nathan Joy's officer character to "not set anything else on fire, please!" was really great.

After dealing with the early troglodytes, the pilots moved deeper into the mine and found three branching corridors.

One corridor sloped steeply downward into a cavern with damp, water slick walls. They weren't sure what to make of that, but decided to avoid it

A second corridor led to a room filled with dewy cobwebs and massive spider webs, but noticeably absent of cave insects. Some rocks were thrown into the webs, and they could barely make out some scuttling movement on the ceiling. After some more discussion about the advisability of setting the webs on fire, everyone decided to go some place else.

The last corridor led to a deliberate pile of rocks constricting access to the passage. The pilots could squeeze past the rocks, but it would be slow and leave them exposed. While they were considering it, a pair of 7' tall green skinned man-like creatures (aka trolls) approached from the far side of the obstruction. There was a brief conversation, and the trolls offered to let them pass for a lot of gold. How much gold? Well, the trolls weren't going to set their prices until they knew exactly how much gold the pilots had available. +Nathan Joy wasn't playing that game, and the pilots walked away to evaluate their options. No one wanted to tangle with the giant spiders, so they got out their ultratech rope and tied off a belaying line for the downsloping cavern. +Kevin Smyth went first, with everyone else waiting until the established an all clear. As he got near the cavern floor, he noticed it was slightly wet and glass slick. Worried, he tossed a rock at it, and then the grey ooze's multiple pseudo-pods rose up and tried to grab him. He desperately retreated while the other pilots pulled him up, and the only casualties were a yard or so of rope. The ooze couldn't pull itself up the slope, though it tried.

There wasn't a lot of discussion about trying that again. The spiders were still a no go, so the pilots went back to the trolls.

Kevin went first again, trying to sneak past the rock pile. He got most of the way before the trolls noticed, and then squirmed the rest of the way out, drew his wakizashi in a reversed grip, and went into close combat with one of the trolls. The troll got a maximum damage critical hit of a bite early on, but even that wasn't enough to penetrate the ultra-tech armor, so this combat turned into a farce of the troll trying to grab at Kevin while Kevin slowly hacked it up. He was somewhat penalized by the troll's mouth-grapple, but his usual strategy of "chop off some limbs" seemed to work okay.

(It wasn't until later that I actually looked up the rules for Injury Tolerance: Independent Limbs, and discovered that Kevin would have been making his life much worse by doing this. Oh, well).

The other troll casually knocked over the rock pile and advanced on Nate and Ted. Several center of mass shots later, and that troll was... surprisingly hale and hearty, thanks to its lack of vitals. Ted then switched to our usual strategy for dealing with extremely nasty foes: shoot them in the eyes. He shot out an eye and expected the thing to fall over, but trolls don't have brains, either, so that wasn't a lot more effective. He didn't notice it, but the troll's eye regenerated almost immediately, so it wasn't very badly effected at all. However, trolls don't regenerate nearly fast enough to handle being shot by a dozen or more rifle bullets, and it eventually collapsed.

The pilots, having previously established that the methane concentration in this area was heavy enough that it would no longer randomly ignite (methane stoichiometry is weird and particular), tried to burn the bodies, but for some reason the troll didn't burn. So they chopped them into pieces sized for convenient carrying and lugged them over to the grey ooze tunnel, and then tossed them down.

This is when I finally looked up the rules on Independent Body Parts, and realized that the trolls' limbs should have been attacking. Still, it was late and the trolls had been fairly beaten, so we glossed over it with some Fright Checks for when the limbs animated and attacked.

We ended the session with the pilots victory over the trolls. They're still looking for the vault of industrial metals, and they suspect there's more troglodytes to overcome.

This was an odd dungeon to prepare. I kept having to fight my usual DF instincts of "make the dungeon as challenging as possible" and stick with "let's be cool and awesome."

Troglodytes aren't exactly a favorite, nostalgic monster race for me, but they worked nicely as a "You must be this tall to ride" monster to explain why the natives hadn't cleared the mines. As I set them up, they're an extremely difficult foe for non-magical TL2 delvers to clear out of enclosed spaces: horrid nauseating stink, deadly methane fumes that deprive the delvers of light sources, and decent enough combat skills. For the ultra-tech pilots that ignore most of these problems, they weren't much of a problem, at least in small numbers. We'll see what happens when the pilots face dozens of them at a time.

After I'd set the troglodytes as the primary obstacle, I knew I wanted to include some iconic encounters to see how the ultratech pilots would handle them. I didn't want anything that would be clearly too hard, so no insubstantial ghosts or monsters that needed magic weapons to defeat. But oozes, giant spiders, and trolls are things that very much go back to the hobby's roots. And the trolls already had adequate stats thanks to +Peter V. Dell'Orto's work in DF Monsters. I was pretty happy with how they worked out, though a little sad that the grey ooze didn't get to corrode anyone's armor.

I was actually worried about the danger of the trolls, though it turned out to be a non-issue. They just weren't dangerous enough when they couldn't penetrate the pilot's armor. It might have gone the other way if the trolls had managed to get a solid grapple going and started bending the delvers into pretzels. Or if I'd remembered that the pilot's armor is flexible and Kevin should have been experiencing some blunt trauma from the troll bites.

Sometime soon, we'll continue this dungeon crawling experience with hordes of troglodytes and the dwarven golems. It should be fun.

Now I'm also tempted to run this dungeon in a standard DF game. Poisonous, flammable air would be a nice challenge for experienced delvers, and it really does change tactics in a lot of ways. "Just burn it out" becomes less viable when you set the air around you on fire, though there are wizardly ways to get around that I suspect.

Posted by Mark Langsdorf at 7:34 AM

Email ThisBlogThis!Share to TwitterShare to FacebookShare to Pinterest
Labels: Actual Play, GURPS, Mecha Against the Giants