I'm continuing my read-through of Rappan Athuk with the third level, "Beware of Purple Worms!" It's another level that doesn't quite manage to be competently written, but isn't noticeably awful, either. It has a moment or two that is fairly decent, and maybe an idea that could be reused in another, better dungeon. 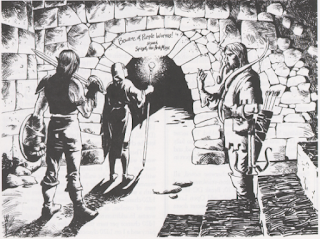 That warning is inscribed in glowing runes just before the entrance to the dungeon level proper. As warnings go, it's a little vague: the purple worms attack people in the center of the cavern that is the first major room, and also are attracted to light sources. Another line or two about staying near the cavern walls and/or not using light sources would probably have been useful, but it's a warning that explicitly names a threat in the dungeon. For Rappan Athuk, that's pretty good.

The description of the level itself claims there is a delicate food chain: the purple worms feed on giant rats and are hunted by umber hulks. Exterminating one of the elements of the food chain changes the presence of the other elements, and the GM is directed to "adjust the wandering monster table accordingly." That's the kind of directive I might write in my own campaign notes as a reminder to myself, but I think it's a bit lacking in a published dungeon. It's basically an instruction to make something up, and if the GM had the time or desire to make stuff up, why buy a published dungeon?

There's a very well hidden tomb of an unknown mage in the purple worm cavern. There's some extremely nice treasure: staff of power, robe of the arch-magi, and roughly 10,000 gp in jewelry. All that treasure is also cursed if stolen, with a curse that is extremely hard to remove, requiring multiple high level spells and then inflicting a secondary curse on the thief. It's possibly realistic, but it basically means that the PCs either can't take the treasure, or get punished heavily for doing so. It works out to about half a page of text that might as well not be there.

A description of a rakasha's lair and his multi-layered illusions takes up two or three pages. The rakasha has different illusions depending on how dangerous he thinks the PCs are, and each of his three rooms gets different descriptions depending on which illusion is in place. I can't really tell if this is a hint of brilliance or more humdrum stuff, because the set up is just too complicated. Still, it seems better than most parts of Rappan Athuk.

This is a surprisingly short level, with only 9 named rooms and another six subrooms. As is usual for Rappan Athuk, it's a fairly linear level. There's a total of three branching points, and it's otherwise a straight shot. The map makes it look slightly more complicated than it is.

There is a subcomplex of rooms that loop and branch, but since they're all explicitly empty except for random dungeon dressing and random encounters, I don't know how useful or interesting they are.

One of the branching points is a river passage to level 3a. As usual in Rappan Athuk, there's no text in this level describing the passage, and the text in level 3a vague about this passage: there's certainly a rapid currrent in level 3a that will carry people to level 6a in twenty minutes, but there's no suggestion of how long it takes to get from level 3 to level 3a. Somewhat bizarrely, the level 3a room description alludes to the river in level 3 splitting, so it's possible to go straight to level 6a as well as go through level 3a on the way to level 6a, but there's no text in level 3 about it. The description of level 6a barely mentions the river at all, and says it comes from level 3 only. It's endemic of the slap-dash, half-assed way that Rappan Athuk is put together.

Rappan Athuk isn't a very good dungeon. It's very linear, both in its design for individual levels and for the connections between levels. It's uninspired, with underdeveloped encounter design. It's not put together very well, as I've noted about the few alternate level connections like the river above.

I don't think I'd enjoy playing in Rappan Athuk. And as a GM, I'm annoyed that I paid money for a not very polished, not very well designed adventure. Fixing the problems with Rappan Athuk would take nearly as much effort as creating my own dungeon (because that's basically what I would have to do). It wouldn't even provide much inspiration for a redesign, since the individual levels are so bland and badly put together.

I'm going to go through a couple more levels to see if some part of it starts to hang together. If not, I'm going to give up and try doing a read through of something that isn't so uninspiring.
Posted by Mark Langsdorf at 4:51 PM