I'm continuing to run my GURPS After the End game. This sessions was a bit haphazard and improvised. On the plus side, we added a new player to the group this week: Eilmyn. Shes' very new to role-playing, but she liked the game enough to come back so I must be doing something right.

The sixth session with the PCs recovering a pristine but heavily modified Dodge Power Wagon and ending up deeply in debt to the contact who'd provided the information pointing them to the truck. At the start of this session, I introduced Eilmyn's character as an agent of that contact, someone who would be sent along with them in order to make sure they were working to pay back the debt.

The introduction turned into a bit of unfortunate comedy: I asked Eilmyn to describe Redfrost, and since Eilmyn was is pretty new to role-playing, she was completely unprepared. I fell back to introducing the other characters, and we prompted Eilmyn enough to get a physical description, but it wasn't the best gaming experience.

The next stumbling block was that the PCs hard no real plans. They had a vague goal: revive the astronaut in order to find the lost FEMA cache and become rich beyond the dreams of avarice, but no real idea of how to achieve that. They were supposed to have figured that out over email the week before, but the discussion had been inconclusive. I prompted them with a couple of ideas and they eventually decided to head toward Uxbridge Farms where a pre-Fall supercomputer might be able to tell the location of pre-Fall medical locations that might be able to revive the astronaut.

The next problem was that they were a bunch of traders without any real trade goods. After a little more prompting, they decided to scavenge the ruins of Boston on the way out, looking for high-tech goods that could make a good profit in Uxbridge Farms.

There was also an inconclusive bit where they realized they needed to modify the Power Wagon's engine to use ethanol or biodiesel, and no one could decide which option to use. This wasn't helped by the fact that Nate was running late due to a schedule change and everyone was deferring to the techie. Since the costs for both systems are the same, we went through the gadgeteering rolls and agreed that Nate would decide what Rabbit had installed at some future date.

Obviously, I wasn't really prepared for whatever they were doing, so this was a pretty improvised session. Fortunately, After the End has plenty of support for scavenging and it doesn't require a lot of prep. The Pcs rolled some Perception checks to find some good stuff and went into the buildings, which were basically falling apart. Wisely, they decided to leave Edwin on guard, since his huge size and massive weight are definitely disadvantages when exploring rotting buildings. As it was, in the first building, despite the difficulty, everyone rolled near critical successes and got the loot out without problem.

That luck continued in a mostly intact grocery, and failed badly in a ruined research lab. Ben'n collapsed part of a wall on him and Wash, and while neither of them were injured, the noise alerted the local greenskin mutants.

I quickly drew up a map of the building and stationed the PCs in and around it, and then placed nine greenskin mutants outside. I'd prefer to have been more prepared, but this didn't take too long and I don't think it's any worse than drawing maps during play at a tabletop game.

The greenskins charged in, dividing into groups to attack the widely separated PCs. Redfrost pulled out a 9mm semi-automatic pistol and backpedaled, firing high-damage shots into the greenskins as they approached her and dodging their attacks.

Edwin charged in to support her, slamming his clawed feet into another greenskin that was charging him. At a combined impact of about 50 miles per hour, he smashed through the greenskin's excessive DR and also took enough damage to almost break his own feet. He also smashed a support beam in the ceiling, dropping acoustic tile and miscellaneous gunk in a three yard radius and almost taking out Redfrost. Two more greenskins threw spears at him, but failed to penetrate his armor and thick feathers. He then jump another greenskin that was menacing Redfrost and clobbered him from the flank with one of his yield sign axes.

Wash hid from the greenskins and was nearly overrun but managed to loose an arrow into his attacker's eye at the last moment. That was his only kill, at the same time that Redfrost had dropped two greenskins and severely wounded another. As Kevin noted, "This is why Black Widow is better that Hawkeye." Ben'n was standing near Wash but has been surprised by the attack and barely got his rifle to shoulder before the fighting was over.

Two of the greenskins ran around for the truck, defended by Rabbit. Rabbit fired his shotgun at one of them, but even a slug barely penetrated their thick skin. Luckily for Rabbit, but the time the greenskins reached him, the rest of their allies were mostly dying and dead and the survivors panicked and ran off.

We ended the session at that point. 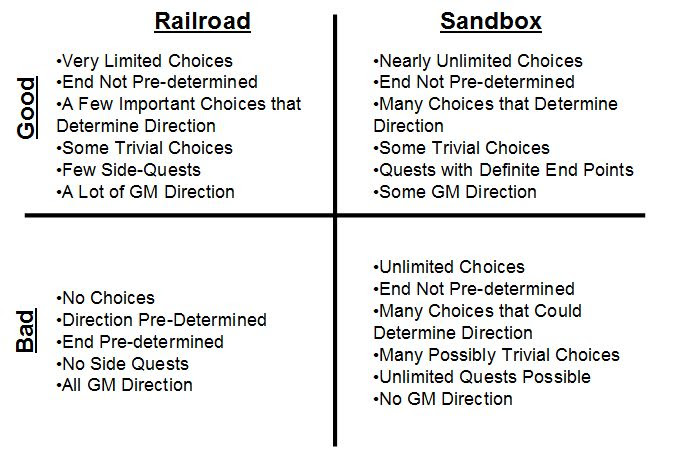 I'm slowly coming to the conclusion that this group just doesn't do open-ended sandbox games very well. They can handle small, linear dungeons and obvious set pieces, but give them a dozen options and they dither with option paralysis. I need to accept that and give them better guidelines. I don't want to railroad them, but putting them on rails would probably help.

Other than that, this session went okay for a small piece of improvised filler. The greenskins continue to not be a threat - I need to give them better weapons than spears, obviously - and the scavenging is too much die rolling with too little decision making, I think.

I'm going to prep a better bit of scavenging for the next session, and make it into a set piece and see how that goes. I suspect it will go fairly well if I can come up with something good.
Posted by Mark Langsdorf at 6:19 AM