My experience in running games is that if you have some kind of battle mini-game in which multiple people are on the same side but only one player gets to make significant choices, then the players who don't get to make choices are going to find it very boring. The example that sticks in my mind is a Star Wars game I ran when multiple PCs jumped into a single large starfighter: one PC was the pilot, and got to maneuver the ship and fire weapons, and other PCs were secondary gunners, the damage control engineer, and the the guy who ran the shields. The pilot had a reasonably degree of fun maneuvering the ship, dodging enemy fire, and shooting enemy fighters. The secondary gunner had some fun shooting enemy fighters. The engineer and the shield operator, even though they nominally had decisions to make and got to roll the dice every turn, became bored very quickly.

I bring this up because I'm thinking about running a GURPS game about Mass Combat. In GURPS Mass Combat, there's normally one commander who decides the strategy and rolls the dice, and any other PCs can choose the amount of risk they want to take for significant action that might affect the battle but otherwise aren't making big decisions. My expectation is that for the players who are interested in Mass Combat at all, that the only fun position will be the commander and choosing risk and attempting significant actions will be at best a sad consolation prize. The way to keep everyone interested is to split a single battle with a single commander on each size into multiple fronts, one per PC commander. That way, everyone gets to make important decisions.

Mass Combat has some rules for running three-sided battles and subordinate commands (Mass Combat p40-41). Ironically, they advise merging multiple allied sides into a single unified command, so I'm going to disregard that advice and come up with my own house rules.

A force with multiple PC commanders has to have a single overall commander and intelligence chief during reconnaissance operations. It only splits into multiple fronts when the battle is joined. After that, each front is a separate battle for purposes of calculating troop strength and class superiority, defense bonuses, positional bonuses, casualties, and the like.

Dividing Forces at the Start

Before the first round of combat, the PCs need to split their forces into individual fronts and assign a commander PC to each front. They can do this however they want: equal split of all forces, assign one player all the cavalry and split the rest, give one player all the units of the same race in a multi-racial force, whatever. The only restrictions are that each PC needs to have enough units to be interesting: preferably at least 10 units. Players need to work out the details among themselves, with the overall commander having final say aside from a GM veto in the unlikely event that people are being jerks.

The GM also needs to divide the enemy force as he sees fit, based on the personality of the overall enemy commander. One enemy commander can be assigned to multiple fronts, or subordinate commanders can be created and assigned, as appropriate. In general, each front should have a proportional share of the total enemy force relative to the share of the PCs' forces in the front, but the GM can make decisions as he sees fit: he can assign all the Marine troops to the river crossing in one front and all the cavalry to another front, if that's an appropriate decision for the NPC commander.

The side that lost the reconnaissance contest divides their troops first, and the side that won responds to that division based on the initial intelligence for the battle type (Mass Combat 30). In the case of a tie, the players split their forces first but can reassign entire fronts after the GM has split his forces.

After any round of battle, troops can be transferred between fronts freely. Troops get the PB of the front they move into and calculate casualties as the worse of the front they left and the front they're moving into. Calculate TS and class superiority normally based on the new troops in the front. 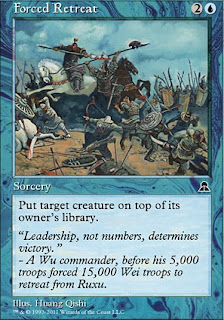 A front is collapsed if it has taken 100% casualties, or has won or tied after choosing the Fighting Retreat strategy, or has completed a Full Retreat strategy. An enemy with a collapsed front MUST reinforce with fresh troops, since there's still a PC that needs to fight. The reinforcing troops calculate casualties and PB normally, to a maximum of -50% casualties for the reinforcements and +5 PB for the other side. A PC with a collapsed front can either get reinforcements, using the above rules, or sit out the rest of the battle in which case any enemy troops in his former front can be moved to other fronts. This doesn't apply if all fronts on a side are in collapse at the end of the same round: the battle is over and the pursuit can possibly begin.

Note that it is legitimate to have multiple fronts Retreat while one front remains fighting a rear guard action to hold up pursuit. This is generally pretty rough on the troops fighting the rear guard.

In a multifront siege, some fronts may be involved in Deliberate Attacks against Deliberate Defenses (called "siegework") while other fronts may choose different strategies (called "activity"). Split each siegework battle round into 6 segmented battle rounds during which activity can take place. Only roll for the siegework battle strategies at the end of the 6 segmented rounds, and only if the forces involved in the front performed siegework for at least 4 of the 6 segments. If a front did activity for three or more segments, treat any segments that were intended to be siegework as though the attacker had chosen the Attack strategy and the defender the Defense strategy and resolve them all at once after the six battle round.

Posted by Mark Langsdorf at 4:39 AM