Continuing on the theme of things that almost no one wants to read, I present another pair of conversions from the sadly obscure and underrated Jovian Chronicles setting by Dream Pod 9.

The Bricriu corvette is older than CEGA itself, dating back to 21 34 when the Orbital Colonies developed it in order to defend themselves should the wars on Earth "spill over" into her surrounding space. The ship is small and cramped, and it has few crew amenities. The modern version of the Bricriu, or "Brick," as it is affectionately known, serves as a fast support craft, armed with both anti-ship and anti-fighter weaponry. 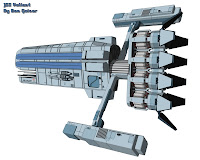 Designed for long-range patrols and raids, the swift Valiant-class strike carriers have become the backbone of the Jovian fleet. A Valiant is a combination of battlecruiser and carrier, equipped with extensive internal repair bays that allow it to tend to several ships' worth of exo-armors and fighters. It also sports enormous firepower, including the first generation spinal laser that is now common on many of the largest Jovian ships. Valiant-class carriers are all named with words beginning with the letter "v."

What's the tonnage of a Bricriu? There are published statistics for it in the original Mekton II version of Jovian Chronicles, in both editions of the Silhouette Jovian Chronicles, in both printings of the Jovian Chronicles Mechanical Catalog, and in both editions of the Lightning Strike miniatures wargame. 7 sets of statistics, and I don't think more than any 2 agree with each other. Maybe Marc Vezina will chime in with the answer in the comments, but failing that, I just had to pick a number. I'm mostly using the Mechanical Catalog, 2nd printing as my reference, which puts the Bricriu at 4000 tons, so SM+9 it is.

Other than that mildly annoying question, the Bricriu converted over cleanly. The two sets of triple turrets are clearly medium batteries; the single habitat provides just barely enough space for 36 people if you cram them in tightly. The published crew of 36 matches the workspace and weapon layout in Spaceships fairly well, though presumably a fair number of the PDS lasers would be slaved together to allow workers for a damage control party.

One unfortunate issue is that the PDS is in a turret on the front hull and can't engage missile attacks on the rear hull. I'd probably handwave that as the Bricriu being old enough that the design predates largescale use of exo-armors and spacefighters. Against the other Bricrius, Hachimans, Ullers, and similar destroyer and missile cruisers with terrible acceleration that it was built to fight, having a blindspot was not a big deal because no one would be able to take advantage of it.

In contrast to the Bricriu, the tonnage of a Valiant is canonically about 50 ktons, though that's a suspect number. First off, it's larger than the mass of the ship's individual components within the JC design system. It's also much larger (usually, anyway, as none of these numbers are consistent from source to source) than the Poseidon and Godsfire battleships and supercarriers, and while the Valiant is clearly intended to be a nifty gee-whiz PC ship, it's also never described as being larger than either of those vessels. I went with the fluff over (some of) the stats, and made it SM+10.

Again, most things converted over cleanly, and being a larger ship meant that I could use secondary batteries and sub-tertiary PDS lasers, so that aside from the spinal laser, the individual weapons are the same size as a Bricrius, as they are in the source write-ups. I cheated and used the rapid-fire option for the missile bays, which is not legal by Spaceships rules, but gives pleasingly small missiles that launch in mass. I don't think they're any more unbalanced than anything else relating to Spaceship missiles.

I was stuck for size of the crew (sources vary from large to very large, with no mention of why) and the amount of strike craft it can carry. 20 SM+5 exos is more than it usually carries in JC, but most JC exos are more than 30 tons, so I think it works out okay.

I'm looking forward to seeing it in action.
Posted by Mark Langsdorf at 4:14 AM