Melee Academy: Using Your Friends to Keep Your Reach Advantage

Melee Academy is a monthly cross-blog article and link-fest among the GURPS blogs, with each article focusing on some aspect of melee tactics. There's supposed to be a theme each month, and this month's theme is using Reach.

My contribution is an extension of Peter Dell'Orto's "Keeping Your Reach Advantage." Peter focuses on individuals using a reach weapon. I'm focusing on groups. 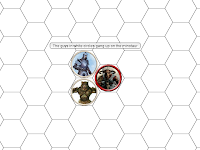 GURPS tactics heavily favor concentration of force. Making multiple attacks from multiple sources is one of the best ways to overwhelm a target's defenses: each additional defense is at a penalty, of course, and while a Retreat gives a big bonus to Dodge and Fencing parries from a single attacker, it doesn't apply at all to attacks from a different attacker. In Dungeon Fantasy, the usual way to achieve this concentration of force is two reasonably skilled attackers making Rapid Strikes, Dual Weapon Attacks, or Extra Attacks on a single foe. 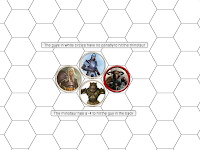 Reach weapons can explicitly be used to attack through the hex occupied by an ally (Basic p388). If two defenders with Reach 1 weapons stand in front of an allied spearman with a Reach 2 weapon, all three of them can strike an enemy adjacent to the two front characters. Even if the enemy has a Reach 2 weapon of his own, he has a -4 penalty to attack the spearmen, since the two defenders in front act as cover. The spearman can control the range easily because any foe with Reach 1 weapon has to step in Close Combat with one of his allies in order to reach him, and striking out of a close combat is a difficult business and the swordsmen still count as cover. Even if the foe decides to make a Move or Move and Attack to get to the spearman, he has to make several difficult Evade attacks to get to the spearman if he has to go through the defenders.

Taking Advantage of Reach with a Shield Wall

If the defenders have the appropriate perks (Shield Wall Training, Sacrificial Block, Sacrificial Parry, and/or Teamwork), they can even use their Defenses to defend for the spearman. Between their defenses and the use of their bodies as cover, the spearman is well enough defended that generally suicidal maneuvers such as All-Out Attacks become viable. Two defenders and two spearmen in a 2 by 2 formation can put up to 6 attacks (a normal Attack from each of the defenders and an All-Out Attack Double from each of the spearmen) against a single foe, mostly likely overwhelming any defenses.

There are a lot of variations on this tactic. Two high skill characters acting as defenders (such as a DF Knight and a DF Swashbuckler) can easily hold the line while making Defensive Attacks to improve their own defenses, while lower skill characters with Reach 2 melee weapons (such as a DF Wizard with a staff or a DF Barbarian with a two-handed flail) use All-Out Attack (Determined) to increase their odds of hitting with a big, powerful attack. Low skill guards acting as defenders on the front line can allow high skill characters standing behind them to unleash their most powerful attacks without worrying about their own defenses. 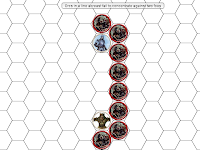 Shield walls with reach weapons are also a good trick for monsters. 8 orcs in a single line abreast are spread too thin to overwhelm a pair of PCs - each PC is attacked by only 2-4 orcs at a time. If the orcs have a shield wall and a second rank with Reach weapons, each PC can be attacked by 5 orcs, and 3 of the orcs can make All-Out Attacks. Many PCs have a hard time defending against 5-8 attacks in a single round. 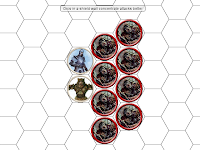 The biggest problem with a multirank shield wall is that the characters in front can't Retreat into hexes occupied by people behind them. For some archetypes, like a heavily armored knight, this isn't a problem. A highly mobile skirmisher like a Swashbuckler who depends on Retreats to augment his defenses may find the costs of a Shield Wall to be higher than the benefits.

Another problem with a multirank shield wall is that the concentration of bodies invites area attacks. An alchemical fire grenade lobbed into the second rank of the shield wall catches at lot more people than the same grenade lobbed at a loose collection of skirmishers.

Shield walls also invite enfilade fire: an arrow fired into the front rank may not hit the target, but there are plenty of targets beyond that it might hit. If the second rank are all making All-Out Attacks, an arrow that misses a defender in the front may hit a defenseless character in the back.

And in Dungeon Fantasy, there are a lot of things that can frustrate shield walls. A group of Acid Spiders are tall enough to walk over most SM+0 defenders, ignoring the entire question of Evade as they move to attack the relatively dangerous spearmen in the second rank. Flying, burrowing, insubstantial, and some diffuse monsters can also move past the defenders with relatively little risk.

Shield Walls require some investment in skill and weapon selection, but can have a big pay off in combat. Even a 4 person delving band can adopt a 2 by 2 shield wall in a narrow corridor, and more delvers or henchmen make the shield wall even better. Smart, organized monsters can also use shield walls to create a disproportionate threat.

Posted by Mark Langsdorf at 8:09 AM