I've been reading a bunch of Shadowrun rules recently. I don't think I'll ever play the game itself, since it requires a level of system mastery that I'm not going to achieve and my current play groups would have little to no patience for the complexity of the rules. But I was enjoying the mental exercise of creating some sample characters.

At least until I got to the point of equipping the rigger (Shadowrun slang for a remote drone operator). The need to allocate limited funds amongst a half dozen or more different drones and vehicles, and then equip each of those drones separately with weapons, ammunition, sensors, accessories, autopilot programs, and network defense firewalls did a huge amount of damage to my enthusiasm for the game. It was just too much work.

I went around looking for some house rules to address the issue, but apparently the Shadowrun rules tinkerers mostly deal with further proliferating the already immense gear catalogs, and less on streamlining the game to be more playable. Then I bitched about the issue to one of my gaming groups, and everyone agreed that it was a problem - and one guy noted that as much as he enjoyed creating characters in GURPS, he didn't enjoy equipping those characters.

I can see his point. In a typical murder-hobo Dungeon Fantasy kind of game, starting funds are usually so restricted, and encumbrance so limited, that the equipping mini-game is tightly constrained. You need to buy 1-3 "good" weapons, the best armor you can afford and carry, whatever specialist gear that is appropriate to your role and budget, and some basic gear. It's a bit of a pain, but it's manageable. But in something like Monster Hunters, where the characters have reasonable to huge budgets, permanent bases to store stuff, and need a wide variety of mission specific equipment, it doesn't make sense to track every round of ammunition, pair of socks, or even specific gun.

Monster Hunters has some rules to abstract some equipment: on a day to day basis, characters who are still in contact with civilization can just have food, and if characters need to go into the wilderness for a few days, it's assumed they just grab some granola bars and beef jerky from the pantry and throw it in the back of the car, and their grocery bill increases slightly in the next month and no one needs to work out the details. The rules are informal, but they're the start of way to handle consumables, at least.

Those rules could be extended and formalized: pay $X to set up a supply of consumable resources, pay $X/Y every month to maintain it, and then your character always has a "sufficient" quantity of those resources as long as they can access the supply. So for (pulling out some numbers more or less at random) $2000 in up front costs and $100/month, a character could have an ammunition dump that
let her have 100 normal rounds for any pistol, rifle, or shotgun she had, and an additional 50 advanced rounds (AP, frangible, baton rounds for shotguns) for each weapon, and yet another 10 exotic rounds (silver, depleted uranium, meteoric iron) for each gun. The character would still be subject to weight penalties, of course, so she might carry less, and she'd be limited to what she had on her if she was cut off from her ammunition dump. So our sample Monster Hunter here might be carry a magazine of silver rounds for each of her pistols, but when the werewolves chase her out into open country and she can't get back to her car to restock, she has to take her shots very carefully. On the other hand, if she's staking vampires by driving to their lairs, she can just restock on her garlic tipped holy bullets after every fight, since she can just go back to her car to get more. 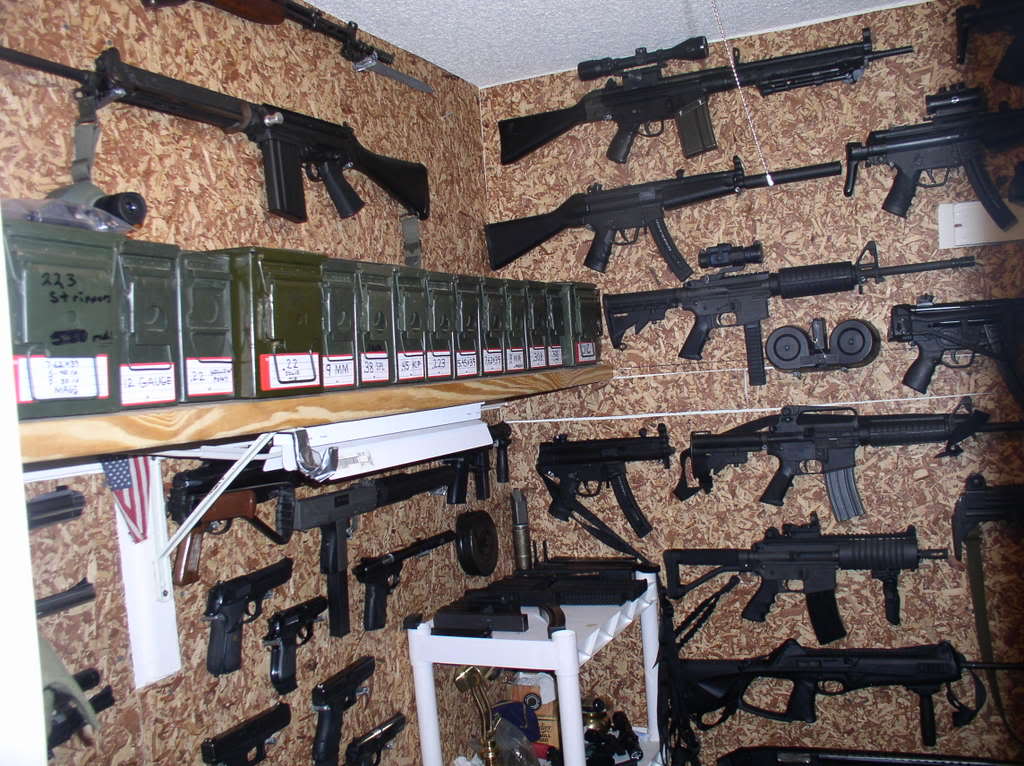 Using the same concept to track non-consumable equipment is trickier. Bullets get shot and food gets eaten, but rifles and swords are somewhat less likely to get destroyed during routine use. Still, it'd be convenient to be able to say "I have a gun closet," grab the appropriate gun with the right accessories for the task and hand, and not have to fret if that gun gets destroyed because there's a half-dozen more just like it on the rack. A gun closet might cost 5x the most expensive gun in the collection, with a monthly maintenance cost of 1/2 the most expensive gun, and allow a character to select a single weapon at a time. So the Monster Hunter above might have a $4500 pistol rack which lets her select any Glock, Colt, or Sig-Sauer pistol she wants (but not an IMI Desert Eagle) and a $5000 accessory closet that lets her use up to $1000 of reflex sights, laser sights, and quick draw holsters with that gun.

Thinking about that more, worrying about individual accessories is exactly what I don't want to do. The accessories rack might just be a leveled purchase, so if the character spends $5000, then she gets assorted gun dohickeys (laser sights, fast-draw rigs, speed-loaders) that give her a +1 to all skill rolls with her guns, and if she spends $25000, that bonus is increased to +2.

Something similar would need to be done for vehicles. I'm not sure if a better approach is to just buy individual vehicles and abstract their accessories, or to require characters to spend a huge some of money to have a vehicle pool. I'd move toward the former, because really only people like James Bond have a meaningful variety of different vehicles and he just gets them from Q, so that's more like a Patron advantage than equipment.

GURPS, at least, already has rules for signature items that are closely associated with a character. I don't think having a gun closet implies any changes for signature gear. A sniper might have his highly customized and personalized Barrett 82, and get the weapon bond perk for it, while a commando would closets of guns. The sniper gets to keep the Barrett as long as he doesn't try to damage it, and
the commando can actively throw away his guns if he needs to and replace them later.

I definitely need to think more about these concepts. There are some good ideas, but I want to flesh them out more.

Posted by Mark Langsdorf at 5:14 AM

Email ThisBlogThis!Share to TwitterShare to FacebookShare to Pinterest
Labels: Ranting