Mecha Against the Giants

So my online Wednesday night gaming group has run into scheduling problems, and we're looking at alternate games we can run when the usual GM isn't available but everyone else. Not particularly seriously, I threw out the following pitch:

Mecha Against the Giants
In a mostly low fantasy world, actual giants are invading. The Court  Wizard performs his  mightiest ritual and summons a squad of Heavy Gear/VOTOMS type mecha pilots and their vehicles. Dragooned against  their will, they must use their powerful vehicles and limited ammunition to defeat the giants and  find a way home.

Response was moderately positive, so now I need to figure out some stuff about how this would work in GURPS and I'm using my blog as a scratch space.

Also, I'm going to start calling the mecha Large Armored Knights, but claim they were invented by a pseudo-Germany so they'd be Grosse Panzer Ritteren and abbreviated GrPzRts or Ritters.

Harking back to Heavy Gear, GrPzRts are roughly equivalent to modern Infantry Fighting Vehicles, and likely armed with a 20mm automatic cannon or a 25mm rifled cannon (plus rockets/missiles, anti-infantry machine guns and grenade launchers, and a small anti-missile system). But their primary weapons do between 6dx3 and 6dx4 damage, or maybe up to 6dx6 (2) with exotic loads like APFSDS. So their front armor needs to be in the DR80 to DR100 range, enough to bounce SAPHE projectiles but still vulnerable to AP and exotic AP.

It's pretty safe to assume that the giants are not going to be strong enough to penetrate the Ritters' front armor nor tough enough to handle being shot by the main guns. Which is fine: that means that I can throw large numbers of giants at the PCs without worrying too much, and the PCs have a trump card as long as they don't run out of ammo.

Still, the giants need some way of harming the ritters. Assuming a weight in the 3-6 ton range, the ritters would have ST 70 to ST 85 or so. Giants that can wrestle a ritter would need about the same strength, which puts them maybe 3 to 4 times as tall as a person. A ST 70 giant with Brawling does 8d+7 damage with a punch, and could reliably crack DR 40 rear armor if he can hit a weak spot. The largest giants, 30' monstrosities with ST 160, swing their clubs and blades for better than 6dx3 damage and can crack a ritter's side armor with some luck. 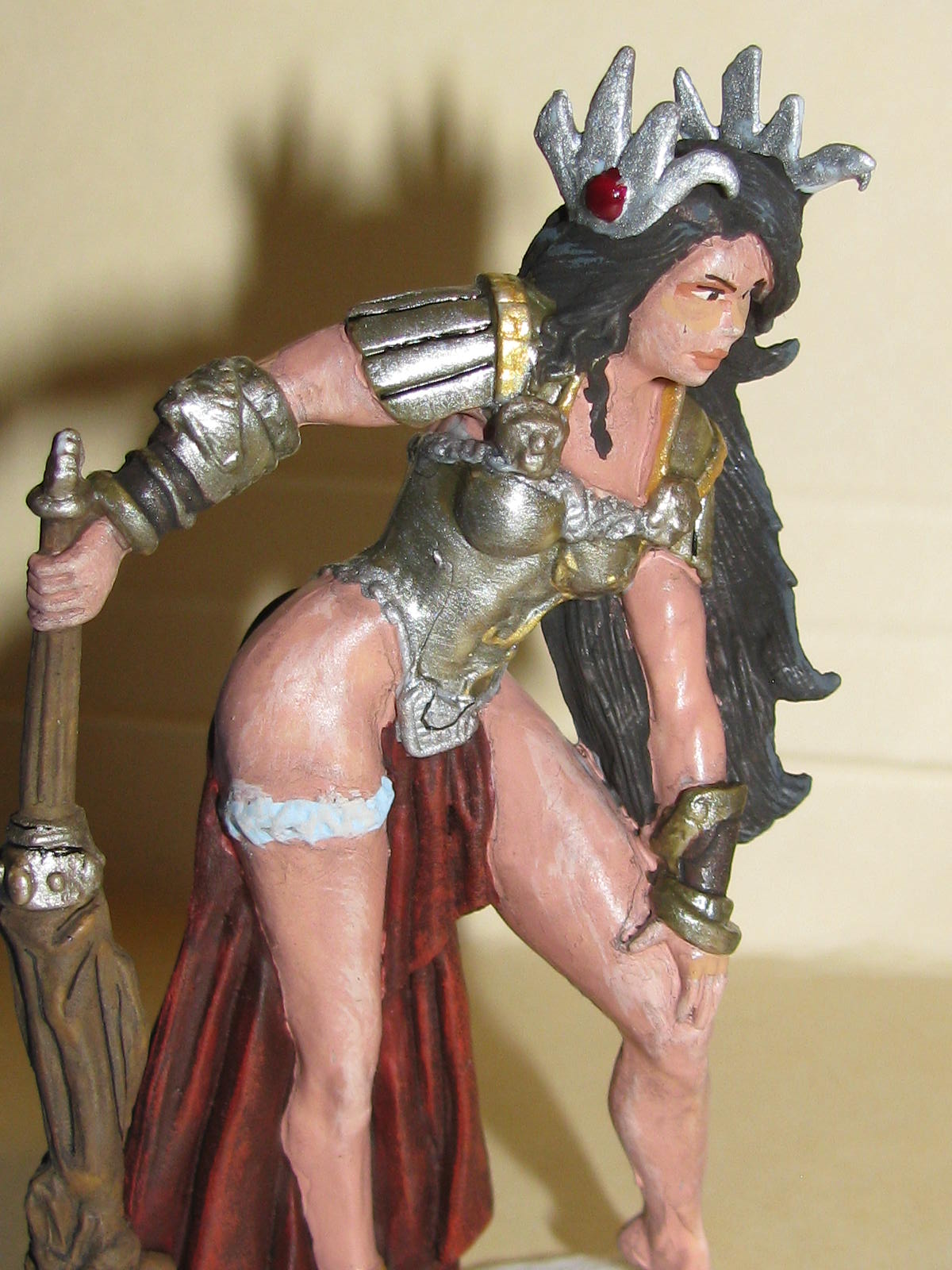 Giants need some inherent DR, preferably a lot of it, to avoid getting chewed to death by anti-infantry light machine guns. In GURPS, a strong, trained brawler does 1/4th his own HP on a typical punch. An ST 70 giant punching himself does 8d+7 damage, average 35 points per hit, and would need DR17 or so to reduce that to 1/4 his HP.  A larger 24' tall giant with ST 115 punches for 16d, averages 56 damage, and needs DR 30 or so. The largest 30' giants have DR 40. The idea of TL2 normal humans, almost entirely without magic or special abilities, needing to summon TL9 armored fighting vehicles to deal with these giants makes a lot more sense!

Ritters have two movement modes: a slow walking mode that handles terrain well, and a faster skating mode (using wheels built into their feet) that bogs down terribly on anything other than metaled roads.

All ritters have DR40 rear armor. They carry 250 rounds for ACs and 90 rounds for rifles. Artillery ritters carry 12 rounds for their 120mm Mortar. They also have a 7.62mm LMG with 1000 rounds or a 60mm anti-personnel mortar with 18 rounds, a 6 shot smoke launcher, and a 10mm anti-missile system with 2000 rounds.

Each ritter has a pilot's survival kit that includes reflex armor BDUs (DR 12/4* with DR 18/7* torso), a combat helmet with visor and gas mask (DR 18 for the head), a carbine with 3 magazines, a pistol with 3 magazines, a survival knife, a bivy tent, a filter canteen, a small first aid kit, a smart blanket, 2 days of compressed rations, and sundry items depending on the expected terrain. 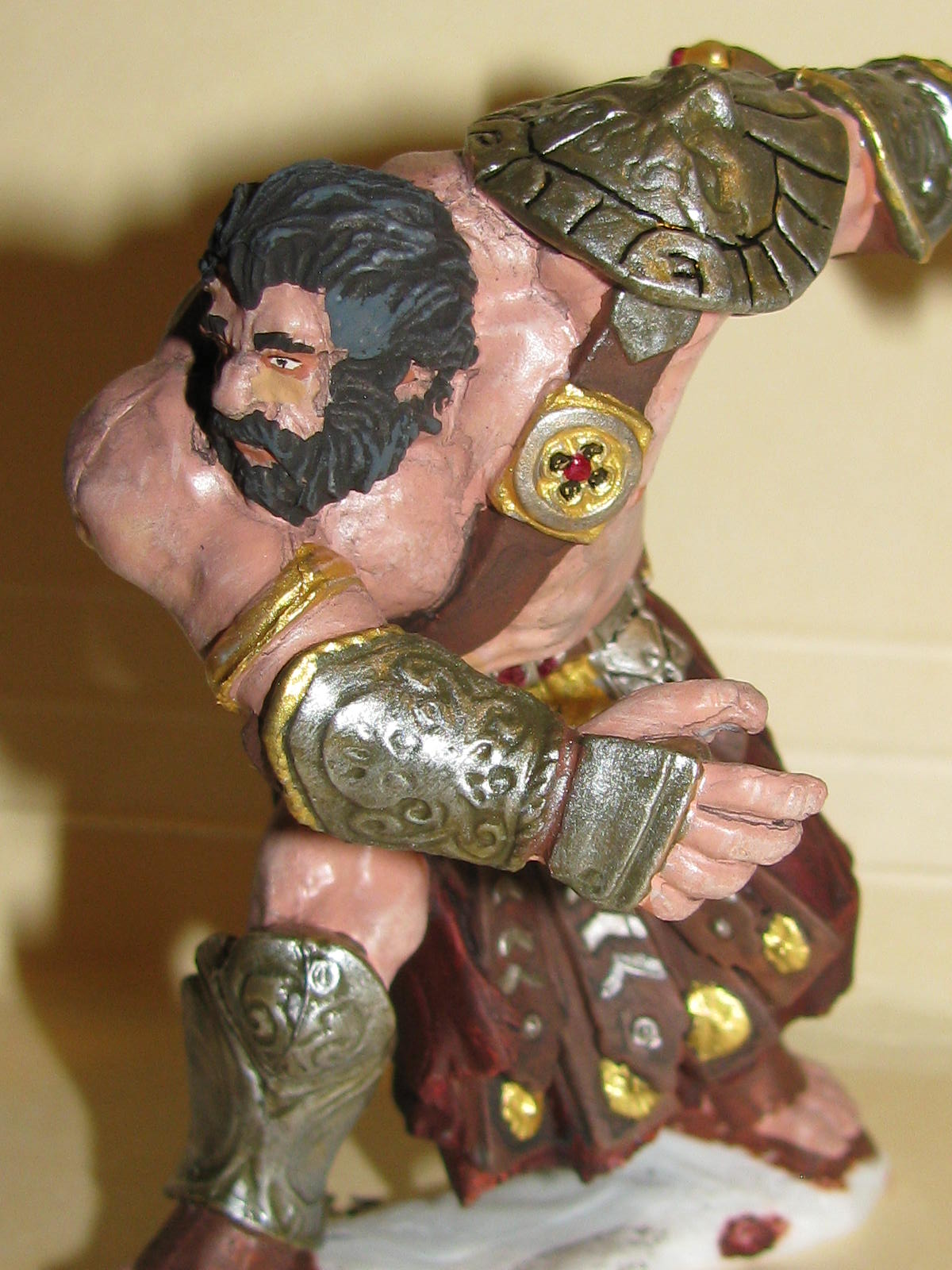 (There might be something wrong with the inherent DR values when wearing the best possible armor gives less DR than your skin. Maybe giants should wear giant skin armor...)

Bullets Per Giant, Giants Per Ritter

It takes 4 rounds from a 7.62mm LMG to bring a weak giant to 0 HP and 10 from the same to bring down a typical giant. A single round of 20mm or better will drop a weak or typical giant; massive giants need multiple rounds of 20mm and 25mm or a single shot to the vitals.

A strong giant with a greatclub can slowly crack an infantry ritter's armor (26 hits to HP 0!), while a massive giant with the same can smash any ritter in 3-5 hits. Weak and typical giants aren't directly a threat, but can be a problem if they behind a ritter or if several of them combine to grapple a ritter and pull it to the ground.

This game concept is mostly about improbably tall men fighting giant robots, but sometimes the giant robot pilots are going to need to get out on foot and do stuff. It's certainly likely that the local aristocracy will realize the pilots are both the aristocracy's necessary saviors and biggest threats, and that someone will eventually conclude that while the ritters are necessary to fight the giants, the ritter pilots could be replaced by someone else (this is possibly not true, when has that stopped people from doing stupid and futile actions?)

As such, I'm going to use the Action templates. Wheel Man is an obvious choice for an ace pilot, but Assassin (for a keen shooter), Face Man (for an iffy pilot with a lot of charm), Investigator (for a clever leader), Scout (for a sneaky pilot of a scout ritter), and Shooter (for a heavy gunner) are also possibilities. A Fast Guy or Weapon Master (from Furious Fists) wouldn't be out of place as a mechanical brawler who will come in handy when ammo is low and beating up giants with clubs made out of tree trunks seems like a good plan.

I'm going run this using MapTools, because that's what I do with online games. I don't think I'm going to change the standard GURPS time scale, but I may up the ground scale to 1 hex = 5 yards. I'll have to experiment, I think.

If MapTools could handle multihex critters properly, I probably wouldn't bother. Maybe. There's trade-offs both ways: a small hex scale means more hexes to cope with but it also means not having to muck with multiplying and dividing ranges. Hmmm.
Posted by Mark Langsdorf at 1:57 PM

Email ThisBlogThis!Share to TwitterShare to FacebookShare to Pinterest
Labels: GURPS, Mecha Against the Giants