Mecha Against the Giants Sessions 15 and 16

Send in the Professionals

The pilots have been destroying all the enemies they've faced, from fortresses full of giants to civilization destroying dragons. Unknown to the pilots, the enemy has spied on them, and realized the unstoppable power of their mecha. And the enemy has decided to deal with the problem by striking at the mecha's weak points: their all too human pilots.

At the start of Session 15, the pilots were staying overnight in a villa in the countryside. It was their last fuel depot before they attacked the giants' final stone castle. I'd drawn up the villa based vaguely on historical Roman villas, and it ended up with guest rooms on the second floor facing an open balcony that overlooked a courtyard. We quickly established which pilots (the lecherous ones and the foolish ones) were wearing their pilot suits to bed, and which weren't. Then I announced they heard a muffled cry of "intruders!" from a night watchman behind the villa, followed by the sound of a body hitting the ground.

The pilots wisely grabbed and put on their helmets, so they had 360-degree night vision and head protection. Then they peaked out the window, just in time to see 8 figures armed with a variety of weapons (swords, bows, staves, twin bastard swords) slip behind a villa outbuilding. +Kevin Smyth dropped out the window with a plan to flank the assassins, while the other pilots grabbed weapons and started moving toward the balcony. 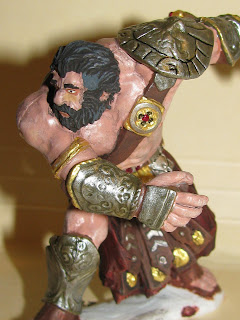 On the ground, Kevin's character spotted a pair of small giants lifting the bowmen to the top of the wall. In turned out that the guys with twin bastard swords had been shrunken giants, and now the giants had grown back to their full 15' size. The giants lifted the swordsmen over the wall, and then one hopped the wall to engage the pilots on the balcony while the other turned to charge Kevin's character.

On the balcony, the pilots started opening fire on the bowmen and swordsmen. Much to their disgust, their targets had high DX and Acrobatic skill, and could use the same Acrobatic Dodge trick that the PC's used to bump their Dodge skills to unreasonable level. Also, the bowmen were insanely high skill Heroic Archers with the Dual-Shot technique, and were firing very accurate, armor penetrating, poisoned tipped arrows at unreasonable speeds.

+Nathan Joy's pilot took some arrows that barely penetrated and lightly poisoned him, while +Uhuk of the Guard's character ran out and immediately got pinned down by arrow fire: he dropped to the ground in response to the first flight of arrows, and each turn he would get to his knees only to have to drop prone again.

+Theodore Briggs' character finally got a couple of lucky shots into the giant in the courtyard's brain, dropping it. One the archers ran up the stairs, so Uhuk's character shot him at point blank range and connected, dropping him. Nate's character took cover in the other stair well, only to be ambushed by a swordsman. Nate's character responded by frantically backpedaling and opening with fully automatic rifle fire, dropping him.

Things Get Worse, Then Get Better

Back behind the villa, Kevin's character used his Luck to avoid a critical hit from the giant, and then discovered that even his best blows with his swords were insufficient to deal with the giant. The next round, the giant got another critical hit, and Kevin was literally out of luck. Even DR 18 armor isn't up to an 9d attack, and Kevin's character was nearly killed and expected to have to spend the rest of the fight desperately defending himself. Ted's character responded to Kevin's character's pleas and shot the giant through the window, wounding it enough to drop prone. Kevin promptly moved up the giant and thrust his swords through the giant's eyes, then attempted to intimidate the last two staff wielding foes. Sadly, at this point his character passed out from blood loss.

The staff wielders jumped over the wall and then flew up onto the balcony, all while the last archer kept Uhuk's character pinned. Ted's character took a shot, but encountered a Reflect Missiles spell - and since he was the lecherous horndog who wasn't wearing armor, a single rifle shot was enough to nearly drop him. He kept on fighting for a round or two, but then passed out.

Nate's character took out the wizard immediately afterwards, and Uhuk's character managed to get behind the cover of one of the pillars after getting hit with an arrow or two. They combined to shoot the second wizard (who blew his Reflect Missile roll, oops) and then tried to figure out how to deal with the last archer. I pointed out that they had their helmets on, and their guns had cameras that fed into the helmet's HUD, and so they could take a minor penalty to poke their gun barrels out from behind cover without risking themselves. Nate originally said he was get an entire arm of cover to aim at the archer, but after having to duck behind cover to avoid a flurry of arrows, he abandoned that plan.

The last archer exchanged fire with them for a while, but they were behind cover and he was exposed on a wall. Eventually he gave and at fled. Unfortunately, the pilots had remotely started their mecha at the start of the combat, and one guy on foot cannot expect to outrun a mecha with only a minute's head start. Nate was very specific about his desire and plan to not just run down the last assassin, but to run him over and then stomp on him a bit. Given that the assassins had caused much more casualties to the pilots than any other foe, it was a pretty reasonable response.

We ended the session there.

Using the PCs' Tactics Against Them

I've played and run a lot of Dungeon Fantasy, but this was the first time that I got to see what a pair of fully optimized, Elven Scouts with maximum Forest Guardian talent could if they were on the GM's side. It was pretty ugly from the PCs' view: all their nasty tricks were being used against them. Obviously, they won eventually, but with half their group at -1xHP or worse and another with 1 HP remaining.

The big players on the assassin's side were the archers and the giants. The swashbucklers ended up being bullet fodder, and while the wizards did some cool stuff, it wasn't enough.

According to my original notes, the next and ultimate set piece in the campaign was going to be an assault on the giant king's castle. As I got closer to needing to really prepare for that sequence, the less I liked it. It felt like a boring retread of the fight at the giant wooden fort.

However, the success of the assassins inspired me. The leadership of the giants know that their assassins didn't survive, but that they did badly wound several of the pilots. That, and some new tactics, meant that a rapid strike by the giants could give the giants 50:1 odds against the remaining pilots, and hopefully the ability to close with the mecha without getting destroyed at range. So that's what is going to happen next: a big open field engagement with the giants on the offensive.

Work on the Castle of Horrors wiki is proceeding, and should go faster now that I've got all my preparations for this campaign completed. So Castle of Horrors should start on time in October. As part of that, I've done some more work on using the Size and Speed/Range table for rapid fire, and I'm in the process of revising the default counts for ritual magic, which I'll publish here when it's complete.
Posted by Mark Langsdorf at 3:27 PM

Email ThisBlogThis!Share to TwitterShare to FacebookShare to Pinterest
Labels: Actual Play, GURPS, Mecha Against the Giants