As it happened, the Sunday after I ran the Dragonslayers session of Mecha Against the Giants (MAtG), my face-to-face group also fought a dragon. One session was exciting and fun for everyone, and the other was a bit of a bore. 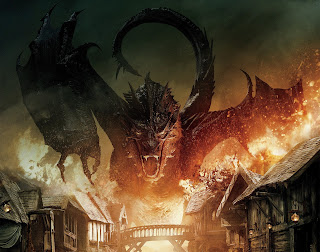 I already went over the MAtG in detail, but let me give a quick overview for people who don't read those summaries. The PCs were attacked by a 100-ton, SM+6 dragon with a 60d breath weapon that
hit out to 1000 yards away. The dragon could damage their mecha, and demonstrated that as it flew in. The pilots responded with an anti-tank missile, followed by light anti-tank rockets and armor-piercing autocannon fire, and dropped it from the sky in a gloriously triumphant victory.

Even as the GM, I really enjoyed the session.

In the face-to-face session, a party of five 5th level adventurers assaulted a blue dragon in his lair using D&D5e rules. We had a Tempest Cleric, an Invoker Wizard, a Knowledge Bard, an Assassin Rogue, and a Frenzied Barbarian (or whatever it's called, I don't play that character and I wouldn't know). The fight started pretty straightforwardly: we crept up on it, widely separated, and then launched an alpha strike of a maximized Shatter, a Fireball, a Shatter, an auto-critical sneak attack with surprise, and a volley of frenzied strikes. The dragon breathed lightning on a couple of us, then burrowed into the ground and fled. He may have popped out once or twice and breathed lightning again, but apparently he was really low on HP and not in the mood for a stand up fight against us.

There really wasn't much we could do to stop a burrowing monster from fleeing. We couldn't dig after him, we couldn't see where he was going, and we hadn't had a conveniently placed, ridiculously strong barbarian in a position to grab his tail and hold him there. We tried playing to the dragon's greed and arrogance by loudly announcing we were stealing his treasures, but that didn't work.

Flimsy Flying Steeds Are Unsatisfying, Too

The next day, game-time, we were flying to our next adventure area on our new hippogriffin mounts when the dragon dropped out of the clouds and attacked us. Again, the sequence of combat was pretty much the same: breath weapon from the dragon, alpha strikes of powerful spells from us. The difference was that while the PCs could survive a breath weapon hit or two, the mounts died whether or not they made their savings throws. And since none of us could fly natively, that meant that every time the dragon breathed, one or more of us was sentenced to death by fall from a great height. 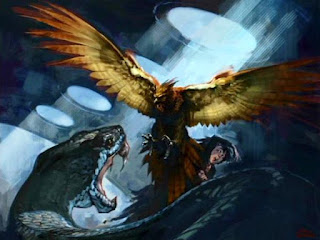 Fortunately, I had decided to memorize Mass Healing Word as a 3rd level cleric spell, even though I wasn't particularly impressed with the spell. So an already annoying combat turned into something of a farce when I starting healing our dead hippogriffins, only for them to be killed the next turn from
another breath weapon, and then revived again. There was a moment that was pretty cool when the barbarian jumped off his dying hippogriffin and onto the dragon's back, but it really wasn't that impressive. We did massive damage and the dragon died.

As a player, these two fights were irritating. The first fight was meh, since the dragon ran off and we couldn't do anything about it. The second fight was still meh, but with the added annoyance of worrying that we'd lose our new hippogriffin mounts that we'd had for all of one session and that in doing so, we'd take 20d6 damage impacting the ground. Even knowing that we were fighting a blue dragon that would use lightning as a weapon, we couldn't do anything useful to prepare for the fight: Protection from Energy is a 3rd level spell, but it only gives minor protection to a single target, and we wouldn't have been able to protect more than four of mounts, and only by exhausting all of our best spells. And clearly, using a 3rd level spell slot for Fireball that did a lot of damage to the dragon was better than extending the life span of a hippogriffin by 1 round, if it was lucky and made it's save.

I don't think the GM was that much more impressed.

What Does It All Mean?

I don't really know what the D&D5e dragon's statistics were like, but he just wasn't that impressive. He turned tail after being attacked by five adventurers of middling levels. He might have been able to safely attack a small village, but a small army with 1000 archers would have defeated him trivially. Ambushing him made it easy to defeat him (if he had been foolish enough to stay and fight) and even when he attacked from ambush, he was only a threat because he could take down our flying steeds. If he had ambushed us while we were on horseback, we would have been annoyed at the cost of replacing our dead steeds, but not really threatened. 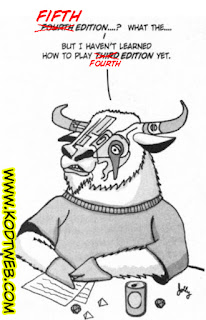 On the other hand, I know what the GURPS dragon's statistics were like, and he's an unholy terror that can walk through .50 machine gun fire without flinching. There is no army of mundane soldiers before WWII that can even hope to hurt him, much less drive him off. Of course, the PCs in MAtG are near-future mecha pilots with weapons that could easily defeat the dragon, and that's what they did. And they did it in a way that was over-the-top and a lot of fun.

In summary, D&D5e hasn't made dragons more interesting to fight than they were in previous editions, and in some ways they're less interesting. It just reinforces my feeling that D&D5e isn't a very good edition: it's better than 2nd, I guess, but not enough better that I wouldn't rather be playing something else.
Posted by Mark Langsdorf at 11:25 AM