Last week, my online group met for the ninth session of Castle of Horrors. This was a fairly unsatisfying session, for a variety of reasons, and I didn't want to revisit it so it's taken a while for me to write it up. I have some ideas about what didn't go right, but I don't have any grand ideas about how to improve things. There are just some things that GURPS doesn't do well, and maybe that most games don't do well, and this session highlighted them.

+Douglas Cole didn't exactly write up a session report, but he shared his feelings about what went wrong on a game design level.

Last session ended with the PCs deciding to call off exploring for a while and take a full twelve hours to rest. For some reason, they decided to set up in the highly exposed courtyard, and this cost them quite dearly. We figured out a watch rotation and I prepared an ambush.

The leprechauns were periodically checking on their gold, and they noticed that someone had stolen it. Not being stupid, they assumed the PCs, being new people wandering around the castle, were the ones who stole it. One of the leprechauns had Invisibility and Flight as Charms, and since he had 12 Destiny Points, he got critical successes when he cast those two spells. So he didn't have to pay anything to cast them or maintain them, and they worked on two of his comrades. As these were brutishly strong Leprechauns with ST 10, it was trivial for the flying leprechauns to lift the others to the top of the wall.

The leprechauns then sneaked along the parapets. With DX 16, SM -4, Stealth-16, and lots of Destiny Points, it was trivial for them to sneak past the PCs' sentries. They positioned themselves in two strike teams: the non-flyers were on the wall to the west of the PCs while the flyers were going to dive bomb them. Almost every member of both groups had vials of Alchemist's Fire ready, except for one on the wall that had a fully expanded Sun Volley charm prepared: he would do 1d+5 bu RoF 10 with an Acc of 8 on his initial attack (again, he'd been Lucky on his casting roll and gotten a critical success).


+Douglas Cole's character Neil has Danger Sense, which I've generally forgotten to deal with but remembered this time. He got just enough warning to be out of his tent when the dive bombers started dropping alchemist's fire on people. His dependent Angela managed to dodge a direct hit, but Neil and +Uhuk of the Guard's character Ryan got coated with sticky burning goo. This was especially alarming, since Ryan is a troll that takes double injury from fire, and alchemist's fire easily penetrated his natural DR. +Kevin Smyth's character Raleigh and her boyfriend Jamie were in their tent, which got riddled by the Sun Volley but mostly missed them. +Theodore Briggs ' character Thomas' tent got set on fire, and so did +Eric Schmidt's character Yusef's tent. Fortunately, modern tents are fire resistant, so they protected the occupants from direct damage, but smoke inhalation was an issue and neither Ted nor Eric wanted to exit into the flames. 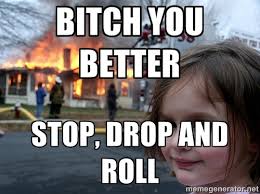 So by the second round of combat, the situation was pretty dire: one PC ally had managed to beat out the fire, but two other PCs were frantically rolling on the ground trying to put out the flames that were eating at them. Two other PCs were pinned in their tents, and the only two PCs that were free to act had Pacifism (Reluctant Killer) and couldn't possibly hit the 2' leprechauns perched on the wall some 60' overhead. Even looking at the leprechauns meant looking into the setting sun, which blinded people until they made a HT roll.

As the GM, I had a different problem: the leprechauns were the opposite of eggshells armed with sledgehammers, in that they had great defense but terrible offense. After the first and only volley of alchemist fire, they had daggers that did 1d-4 im damage and nothing else. The flyers descended on Ryan and started trying to stab him to death, which didn't work, and then started trying to stab him in the eyes, which didn't work well. Meanwhile, the PCs were putting out the flames and getting out of their tents (Yusef cut through the back of his) and making lucky shots on the leprechauns.. The leprechauns could mostly dodge the burst, but mostly isn't good enough when you only have 8 HP and are dealing with 7.62mm rounds.

To make tracking the leprechauns simpler, I'd converted their normal Ridiculous Luck (roll 3 times, every fifteen minutes) to 12 Destiny Points (buy successes) so that I wouldn't have to track when they had used their luck most recently. Unfortunately, 12 Destiny Points meant that even a badly wounded Leprechaun (at -4xHP or worse) could expect to make a lot of consciousness checks, and one of the Leprechauns had Major Healing and could bring them back into the fight. So a fight that was already dragging was just going to drag on, and the leprechauns weren't going to do more than injure a few of the PCs a little bit. I finally just called it, because everyone was already bored and frustrated and no one was interested in having this continue through the rest of the session, much less the through the next session.

Raleigh had tried to negotiate with the Leprechauns, to return the gold in exchange for ending the combat. As it turns out, the Leprechauns were people-eaters, and wanted to restock their larder with the PCs' corpses, so that didn't work out. Raleigh did get a critical success on her Diplomacy checks, so they agreed to not eat her, but it was otherwise a battle to the death. 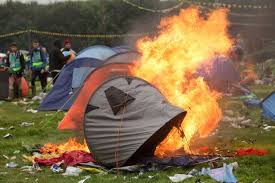 Raleigh's, Thomas', and Yusef's tents were ruined, though they had protected the backpacks within. Everyone decided to move camp to someplace less dangerous, and after some discussion they nixed my suggestion of the hallway and moved back to the dining room. There they encountered a ghost, which after some observation they decided was a butler still supervising dinner, but he didn't bother them and they avoided him and he eventually left to go back to his room downstairs.

The rest of the night was uneventful from the PCs' perspective. Things might have happened in the castle, but they were in a windowless room with the doors closed and they didn't witness anything. At least they all got a full 8 hours of sleep.

The next morning, they got up late and went to explore the leprechauns' rooms. They didn't really find much: a room on the first floor had several crates that the leprechauns used as houses but no interesting loot. The room in the second floor was a garden and larder: the ground was covered with dirt and growing herb plants, and a green-skinned corpse was hanging from a hook in the southeast corner. Uhuk accused me of burying the lede in that description, and it is something I need to work on.

There was one more door in the Leprechaun rooms that looked like it led out to the second floor of the northern tower. It was late, and Uhuk and Doug were sleepy, so we called it there and said we'd explore that door next week.

When I started this game, I warned the players that balance was going to be all over the place. It's extremely difficult to balance encounters for unarmored combatants with weak melee combat skills and little healing magic: everything is going to be a blow-out in the PCs' favor, a massacre of the PCs, or a long, boring grind. The Leprechauns started out as a massacre and turned into a grind.

One of GURPS' problems is its highly detailed, second-by-second combat. Sometimes, this goes well and is interesting, but other times it means a player has to wait twenty minutes to announce that his character is rolling on the ground for the second of three turns. Alternately, after waiting twenty minutes, he can roll defenses against a series of attacks that are unlikely to damage him but have a small chance of crippling him. It just isn't fun.

It's nearly as bad on the GM's side of the screen: I had seven combatants to run, and I'm trying to maximize their damage without being entirely unfair. I probably should have used a slightly different arrangement of the Leprechauns, as a couple of the ones on the wall had Melee charms that they couldn't use. I also possibly should have been more violent, with the flying leprechauns deciding that Ryan wasn't a threat and stabbing some of the other PCs, possibly in the eyes. Giving the leprechauns a second set of potions - possibly liquid ice that would have hurt but not forced the PCs to spend actions putting out fire - would have been a good idea. In retrospect, replacing all the alchemist's fire with liquid ice and poisonous gas potions would have been a great idea.

The PCs screwed up here. I have no idea why they thought camping in the highly exposed courtyard was a good idea, and I'm glad I punished them for it. The question is how much to punish people: a total party kill is always a downer, and it also turns the game into something of a shaggy dog story. +Peter V. Dell'Orto has managed it a couple of times, but I'm very reluctant to do it. Castle of Horrors isn't as escapist as Mecha Against the Giants, but it isn't supposed to be a grim and gritty game either.

On a plus side, the playtest of College Ritual Book magic is continuing and going well. Raleigh has now had enough calamities on healing spells that she's reluctant to continuing using them (double cost on both Major Healing and Minor Healing) and really needs to stop spell-casting for a couple of days. I haven't had to muck around with changing mana fields: her magic is self-limiting in a natural, organic manner. I'm pleased with that.

Since there wasn't a total party kill, the game can continue. I suspect there is going to be a brief foray into the north tower next week, and then I'm not sure about the PCs' plans. They've made noises about continuing to explore the upper levels of the Castle, but doing so might put them into conflict with the gnomes or the sorcerer and I think that's something they want to avoid for now.

Posted by Mark Langsdorf at 9:11 AM