+Peter V. Dell'Orto at Dungeon Fantastic wrote a post on magic item shops versus the domain game: the way that if adventurers can upgrade their abilities by buying magic items, they'll generally do that to the limit if their wealth, while if they can't, they'll spend that money on castles, inns, henchmen, minions, and other facets of the "domain game." I'm already seeing that in the D&D 5e game I'm playing in: now that all the PCs have the best mundane armor that money can buy, we're throwing our funds into turning the dungeons we've conquered into bases because we can't really buy magic items. Whereas in my old Dungeon Fantasy games, PCs poured money into their magic items all the time.

I'm already on record as disliking how magic items work in GURPS Dungeon Fantasy: the utility of any random item is generally pretty low compared to its sale price, so everything turns into vendor trash so that the PCs can buy an actually useful magic item or better mundane equipment. Now I'm wondering if astral diamonds might be a partial solution to the issue. I'm going to noodle around with idea and maybe someone will comment on it. 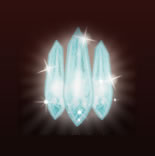 This means that PCs delve, searching for powerful magic items, astral diamonds, and gold. Gold can buy mundane gear, castles, and minions. Powerful magic items and astral diamonds can be traded for each other, but not for gold, so there's no point in trying to trade a Puissance +1 sword for a suit of fine plate armor. Gold can, in theory, be traded for powerful magic items, but the exchange ratio is so awful that delvers will rarely do so: PCs are generally kind of reluctant to pay $10000 for a Puissance +1 sword, there's no way they're going to pay 100x that amount especially when they have a stack of otherwise worthless astral diamonds that could be used to make the trade.

Where Do Astral Diamonds Come From?

Astral diamonds are found in dungeons. Specifically, the souls of powerful monsters and heroes leave astral diamonds behind when they die. Monsters and delvers hoard astral diamonds, and some monsters can consume them in order to become even more powerful. This requires a lot of them, consumed in a short period of time, so if a major demon needs 50 astral diamonds to become an archdemon, eating 3 a year of 17 years doesn't do the job.

Diamonds for Items, Items for Diamonds

The biggest problem I have with astral diamonds is deciding how to price them versus magic items. This is part of my rant about GURPS Magic's magic items in general: Steve Jackson set the energy costs for enchanting back in 1986 or whatever and those costs haven't been changed or really even been looked at very much since. I don't think there's any justifiable reason why Burning Touch costs 300 energy to enchant but Shocking Grasp takes 1500 energy. I'm not about to go through the spells and try to come up with a consistent pricing scheme, and even if I were, I don't think I'd know how. 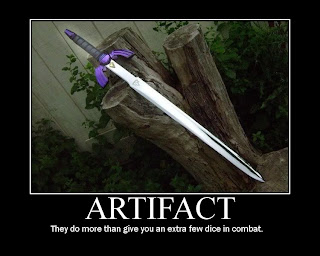 Still, one theme I've been pounding on here is powerful magic items. Maybe the best solution would be to make a virtue out of craziness and say that a single astral diamond converts to 2500 enchantment energy, and for every 2500 energy worth of enchantments, an item can be converted into one astral diamond. So the minimum magic sword has Accuracy +2, Puissance +2, and Defending Sword +1, and the minimum Cornucopia quiver produces $50 arrows: so Fine Balanced Silvered arrows or some such.

Under this scheme, should there even be minor magic items? I'm torn, but I'd almost be tempted to say that anything under 150 energy can be bought with gold (and can't be turned into astral diamonds) at a reasonable price: $5 per energy point, or something. My only concern there is that some of the most annoying enchantments are under that threshold: Deflect +1, Fortify +1, Lighten +1, and Cornucopia of normal arrows are all under 100. The best solution is probably just to fiat those spells to a higher cost or knock them out of existence.

Given that I envision people having 5-10 astral diamonds at a time, it's going to be awfully tempting to commission magic items with Power 3+ and Speed 3+ and then a half dozen other useful enchantments. I think the problem there isn't with the astral diamond concept, but with the Power and Speed enchantments being too cheap for their effects and possibly just too powerful at any cost. Again, some kind of modification of those spells is probably the best solution. I think Power would probably be okay if it could only provide that free energy for 1 spell at a time (so Power 4 can maintain 2 spells of 2 energy maintenance each, or 4 spells of 1 energy each, or 1 spell of 4 energy, not 14 spells of 4 energy maintenance). Speed needs to either have its cost increased by a factor of 10, or just have the last sentence from its description removed, in line with 4e rules for faster casting.

Starting PCs Under This System

In a standard DF game using this system, I'd suggest that each PC start with 1 astral diamond - or the equivalent in enchantments - with no option to purchase more. For a more low magic feeling, PCs don't start with any astral diamonds and have to find them by delving.
Posted by Mark Langsdorf at 12:54 PM