So I got my Bones on Friday, and one of the first things I thought was that the transparent plastic figures look interesting, but it's hard to make out the details on them. The transparent figures are things that are supposed to be translucent, such as ghosts and fire elementals, so putting a heavy coat of paint down on them seemed like it would defeat the point of making them from special plastic in the first place.

I thought that a medium drybrush in a light green for the green figures, or a light yellow for the red figures, would bring out the highlights without disturbing the translucency too much. I used Reaper Master Paint Green Orc Flesh and RMP Buckskin, since I head those lying around (and unfortunately, drying out - I haven't painted in years). I think I was mostly right - the figures have a lot more contrast now, and its a bit easier to see the lines and folds of the figures.

This picture isn't the best, but it should give an idea: 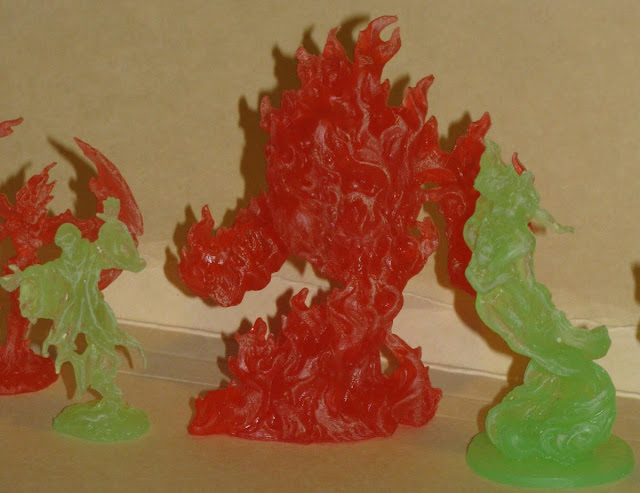 The effect looks best at about 2' distance, holding the figure up to examine it. On the tabletop, the green figures tends to look like they have dark lines on them, which still gives them a bit more definition even if I can't figure out the optical illusion involved.

Anyway, for people who have Reaper Bones and are only half-assed painters, drybrushing the translucent figures is a quick and easy way to make them look better.
Posted by Mark Langsdorf at 9:44 AM