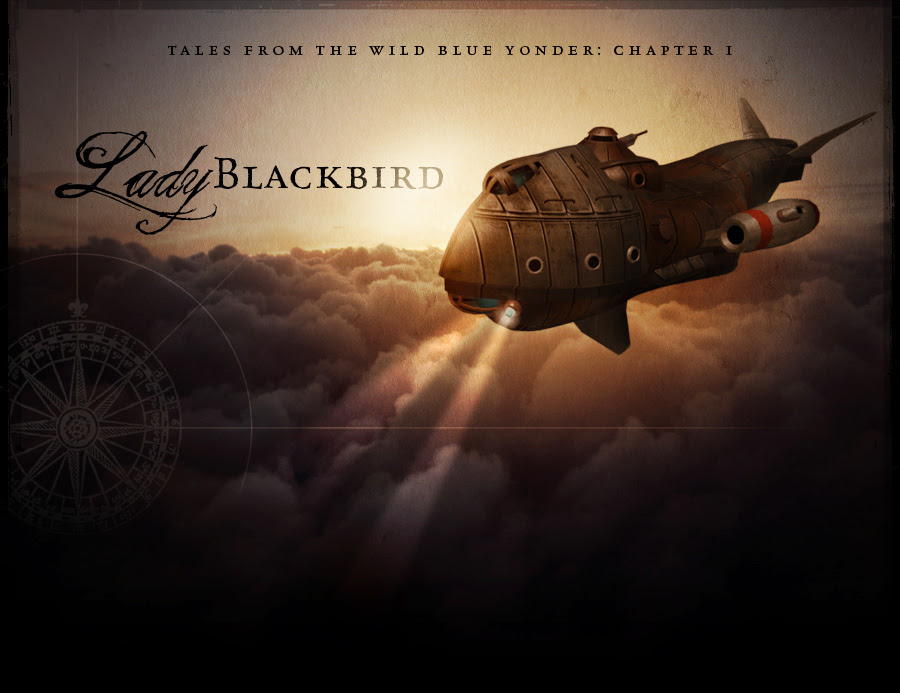 My F2F group's current GM was unprepared today, so one of the backup GMs stepped up with one of his "random, experimental, rules-light, crazy narrative games." I'm generally not fond of these types of games, but I try to be a good sport because it's not like my back-up campaign is prepared right now. In this case, I'm glad I did.

We played Lady Blackbird, a fairly straightforward rules light game with pregenerated characters in a prepared adventure. It's also free, so you can click on that link and read it yourself.

Each PC has several Traits, and each Trait has several Tags associated it. Whenever a PC attempts something, the player chooses an applicable Trait (if possible) and any applicable Tags from that trait, and then rolls 1d6 + 1d6 per Trait or Tag. Each PC also starts with a pool of 7d6, which can be applied to any roll, but are lost when used successfully. Each die of 4+ counts as success, and 2-5 successes are required depending on the GM's assessment of the difficulty. 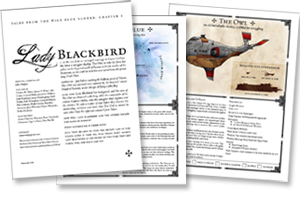 This is no by no means a sophisticated or complicated system, but it is a straightforward system and it seemed to work reasonably well. There aren't any modifiers as such, but the GM can increase or decrease the difficulty depending on what the players are doing, so that wasn't a problem (unlike some of these no-modifier indie games). One twist that our GM threw at us, that I don't think is in the rules but should be, was the idea that we could have separate targets depending on how we approached a task: we might need 5 successes to win a firefight without any damage if we took cover, but we'd only need 4 to win if we fought recklessly but we'd automatically take damage unless we had at least 7 successes. That worked out really well in play, and let us tailor our approaches depending on how likely we thought we were to succeed in a task and how much we needed to succeed.

Lady Blackbird also has a simple experience system: each PC has 3+ goals, and they get an experience point whenever they do something related to their goals. 5 experience points granted a raise, which could be used to buy a new Trait or Tag. Again, this was simple but worked well in play: the goals were clear and had general applicability, so I could easy hit my goal of "Make Plans and Be Commanding" and the guy playing the mechanic could "Spout Amusing Technobabble."

The system isn't without weaknesses. Like all Trait based games, some Traits are just better than others: it's usually better to have the trait Batman than the trait Janitor. The Traits on the pregenerated characters were generally equivalent and widely but not always applicable, but I did find myself using "Ex-Imperial Soldier" a whole lot more than any of the others. A lot of that had to do with the scenario: we started as prisoners on an Imperial Cruiser, so my character's experience with the Imperial Military was more useful than his abilities as a Smuggler. Next session, I expect being a Smuggler will be a lot more important.

We only had four players, so after the GM quickly explained the game and passed out the characters, we talked briefly about who wanted to play what, made some decisions, and got started. I was the dashing smuggler captain Cyrus Vance; everyone else was represented but the mechanic and petty sorcerer Kale.

The scenario starts with the PCs captured and tossed in an Imperial Cruiser's brig. We quickly broke up, beating up the Imperial Marines, stealing their uniforms, and trying to bluff our way out. This failed miserably - we beat up a bunch of marines, but the ship went to a Yellow Alert and we were ambushed trying to leave the brig area. Fortunately, our goblin shapeshifter snuck through the vents and flanked the Imperials, so we managed to break out and hide in some unoccupied crew quarters.

We had a vague long-term plan of using my character's Forgery ability to create some release orders for ourselves and our ship, and then just leave. This was highly complicated by the Yellow Alert, so we realized we needed to calm the ship down. Realizing that Lady Blackbird could create illusions, we hatched a plan to make it look like we had fled into a life raft, which our engineer would rig to launch and then explode. He'd jump off the back of the raft, land on the hull of the Imperial Cruiser, and get retrieved by the rest of us. Thanks to some improbably lucky die rolls, high player skill at Bullshit GM, and similar nonsense, our crazy plan succeeded. We fast talked the Imperial investigators and soon the ship moved off yellow alert.

The next stage our plan was to get our ship refueled, and then we'd need to figure a way to get on it and get permission to leave. We didn't have a plan for the last two parts, but good plans are like jazz and have lots of improvisation, so we started forging the orders to get the parts done that we could get done. About this point, the sabotage attempts that the goblin mechanic had scheduled to go off in another two hours (when we planned to leave the ship) started going off two hours early. Our dice were not rolling as well as they had.

We quickly hatched a plan to bluff our way onto our ship as a bomb detection team, searching the ship under the Imperial XO's orders after he'd heard there was a bomb on our ship. This worked, but then the Imperial XO came down to find out what the hell was going on, accompanied by a couple dozen clockwork soldiers. The sorceress proceeded to use all her electrical sorcery powers to blow stuff up, and I teleported myself and the sorceress' crazy pit-fighter Imperial-hating bodyguard into the hangar control room, at which point violence ensued. We got through a couple more minor complications, took some damage to our ship, and escaped, leaving the Imperial Cruiser limping in our wake.

I've tried various rules light narrativist and semi-narrativist games, from Spirit of the Century to Apocalypse World to Donjon. I'm not generally fond of them: the rules aren't so much "light" as "incomplete", the mechanics are often horrible, and I'm usually not fond of the playstyle. Surprisingly, Lady Blackbird actually worked very well for me. Admittedly, the rules are so simple as to be nearly incomplete, but on the other the hand, they are very straightforward and don't have any special cases. I don't think the game would work nearly as well if we had to create characters, but for a fixed scenario with pregenerated characters, it was fun and relaxing. That's good enough.
Posted by Mark Langsdorf at 5:41 PM