I've been playing a lot of Fallout 4, which is why this session write-up for Castle of Horrors is so late. No apologies.

After last session, I took to heart my players' complaints that there weren't enough clues about where to to and what to do in the dungeon. The first action in correcting this was to claim, retroactively, that they had picked up the ghost butler's diary from his room in the basement and that the grimoire had some journal entries in it. Given that +Kevin Smyth's character Raleigh had to translate both of them, and she's obsessed with magic and not with the mundane details of life in the castle, they didn't have a lot of details, but they did get these hints:
Predictably, the same people who were very hesitant about looting the catacombs and possibly being hit by the curse were suddenly very enthusiastic about looting the tombs after they knew there was some gold there. Still the same curse, but now there was loot to be gained. I suppose it makes sense.

The other thing that we decided to try was designating a "decider." This isn't the old school "caller", a player who conferred with the other players and then relayed their consensus decision to the GM. It's a person who has the responsibility, on a rotating per session basis, of deciding where to go next. The hope is that instead of having everyone wait for someone to speak up, the "decider" has that responsibility and play will go a little faster. As it turns out, we didn't get much opportunity to see how well the concept worked, but we'll keep trying it. 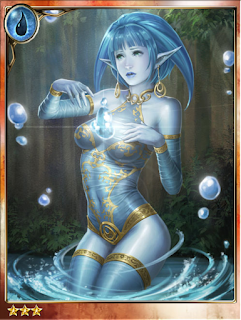 At the end of last session, the PCs were in a water dungeon and looking for a way out. They went south into a hallway, and saw stairs going up to the east and a water filled torture room to the east. They also saw a couple of undines - unearthly beautiful women made of water - in the torture room. +Douglas Cole started making comments about how he'd be sleeping on the couch, which I eventually understood were meant to be in character for his PC Neil, and not meaning that his wife (Doug says his family often ends up in the room with him) was mad at him.

At any rate, the undines wanted rescuing and the PCs were willing to take mild steps to rescue them. The undines were somehow trapped by the stone walls, and +Theodore Briggs' character Thomas offered to carry them out in a bucket. The undines didn't think that would work, and more to the point, were just messing with the PCs' head anyway and trying to get them into a different part of room. The PCs were sliding toward the staircase, and eventually the sadistic brats lost patience and attacked.

The undines' primary attack was a water cannon, causing knockback and potentially drowning if someone got hit in the face, and their secondary attack was leeching the water out of people's bodies. Fortunately for the PCs, they weren't particularly good with either, but Kevin's ally Jamie got knocked around a bit and +Uhuk of the Guard's troll Ryan took a couple of blasts. Thomas laid down some covering fire (literally) with napalm rounds from his grenade launhcer, but the undines just merged with the water to put themselves out and re-emerged elsewhere in the room. Some other people tried attacking with guns, but bullets just went through the undines to little effect. Neil tried firing into the wall to create rock fragments, hoping that would do more damage, but it was a tricky thing to do.

That is Not a Fighting Rooster

+Eric Schmidt was the decider, this week, and he decided that they were going to pack into the catacombs and loot Radu's golden trophy. People rested, restocked, and descended into the catacombs, then searched around until they found Radu's crypt. At which point there was a sudden outbreak of "no, I'm sure you wanted to be the one who opened the crypt, I'll hang out in back."

Eventually Thomas was forced to the front. He set down some anti-ghost rope he'd pulled together, in hopes of containing any undead, searched for traps, and opened the (unlocked) crypt doors. Inside was an embalmed body, a black iron book, and something else.

Raleigh had been maintaining, up until this point, that while "fighting rooster" was the literal translation of the words on the page of the diary, that it had to be an untranslated idiom because nothing about Castle Crowspire suggested that the inhabitants were the type of people buried their pets with them. Everyone had mostly humored her, but also thought that some people like rooster fighting and might have buried a prize, champion rooster with them. People are weird, right? 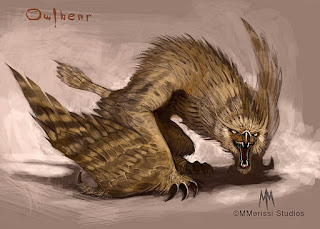 As it turn out, Radu had buried a prize, champion rooster with him. It's just that this particular prize champion rooster was a 9' tall chicken-bear thing. There were some cries of "that explains it!" and "that had to have been against the rules!" but both of Radu and his chicken-bear thing started moving. Raleigh darted forward and grabbed the presumed grimoire, and it looked like a fight would be on.

As soon as Raleigh touched the grimoire, there was a flash of light and everyone briefly found themselves hanging in mid-air over a lake in a cavern. Then gravity took over and people had to make Swimming checks, which they mostly failed. Raleigh had luckily succeeded (Kevin spent Destiny points like mad) and started swimming for shore before her plate armor dragged her under, and Ryan started using his long arms to help fish other people out of the water.

Meanwhile, the three Spheres of Madness that had been minding their own business were very surprised by the sudden appearance of lunch in their little lake. They recovered from surprise at about the same time that most of the PCs managed to get their heads above water, and floated over to fish the PCs out of the water, snip them to bits, and eat them. A fight broke out.

Raleigh, Neil, and Eric's character Qanah were the targets of the initial attack. The spheres' claws couldn't penetrate Raleigh's armor, but they could grapple her and pass her up to the tentacles and beak, which could squeeze her for a little damage and bite at the joints of her armor.  Raleigh attempted to cast Fumble at one point, but the Spheres have Magic Resistance 10 and she failed automatically. That caused a bit of an argument between Kevin and me: I wanted him to roll the dice to see if he critically failed, and he kept pointing out that you're not supposed to roll if your effective skill is less than a 2. Eventually he rolled and didn't critically fail, but he was still grappled and in a bad state.

Qanah wasn't wearing full plate, and while his kevlar mostly protected him from the claw attacks,it did little to keep him from being squeezed. 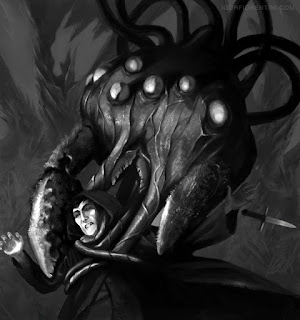 Neil's heavier armor also protected him, for a while. Angela had gotten out of the water on the south side of the cave, aimed her rifle at a sphere, and hesitated to shoot because Neil was in close combat with it. I asked Doug if he wanted her to take the shot (Angela is his character's Ally/Dependent) and he said yes, so she did, and predictably missed and put a 7.62mm round through Neil's arm, breaking it in the process. Neil was frantically trying to shoot the Sphere with his pistol, and it wasn't having any of that ("negligent parry" was the phrase used). Fortunately, Ryan was finished with his life saving duties and managed to connect with a punch that stunned the critter, and then Thomas finished it off with a shotgun slug.

We ended the night there: Neil rescued but badly hurt in the process, and both of the healers in bad shape and grappled by mostly undamaged spheres that were closing in to grapple the rest of the party. If the PCs manage to defeat the spheres, they're still trapped in a cave with no idea how to get back to the castle.

We didn't see much use of the decider concept, as most of the play time was caught up in the two combats. I think it's a sound idea, and the next sessions should see more exploration, so we'll get more chances to try it out.

The other idea we had to speed play, the use of a "shot clock" to declare actions in combat, didn't work too well this time. As the GM, I tend to get caught up in adjudicating the action, and it's hard to remember that I'm also supposed to be enforcing the clock. I may end up making that the previous player's responsibility.

One thing I noticed is that my players tend to become more nit-picky as the combats get more difficult. The undines were annoying, but not particularly dangerous, and whatever rulings I made were pretty much accepted with much disagreement. The Spheres of madness were very dangerous, and I got a lot more arguments from people and sudden interest in exactly how the rules were written.

Aside from those three points, this was a pretty good session. I hadn't exactly expected the teleporter trap in the catacombs to go off, but I thought it might. (And by the way, a hat tip to +Peter V. Dell'Orto for the inspiration.) I am more amused by the players' attitude about the curse now, as it's "sure, that was a surprise and a tough fight, but next time we'll be ready for it and it's a small price to play to be able to loot the catacombs." To which I can only shake my head at their naivety and foolish belief that things are going to be that easy.

On that note, it's not clear to me as to whether the Dread disadvantage includes a supernatural sense to detect the object that you Dread. The consensus was that it doesn't, and that illusions of a Dreaded object work (and conversely, you can walk right up to an object you Dread if it's pitch black). I'm not sure that was the right way to go, but it's what we went with.

Skype continues to suck. I'm hoping that it'll improve this week, but if not, we'll have to move to some other voice chat system. I've tasked the MMORPG players to figure out an alternate system: I don't care what it is, but I don't know about any of them so they can decide based on their own experience.

The PCs think they have a solution for fighting the spheres (have Ryan punch them until they slow down and then shoot them) but we'll see how well that works in play. After that, there's going to be a lot of exploration: it's possible to get back to the Castle from where the PCs are, but it's also possible to get lost in a lot of different ways.

Posted by Mark Langsdorf at 9:16 AM