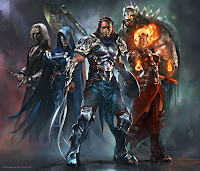 I worked on a GCA file for the Better Fantasy Armor rules. It's up on the Motoslave GCA Repository at this link.

I had to ditch the idea of using the Fluting and Hardened modifiers with Dragonbone, Dragonhide, and Dragonscale - GCA simply doesn't support having modifiers select modifiers in way that I liked. Instead, I created four modifiers for each type of dragon part: young dragon*, dragon*, elder dragon*, and ancient dragon*, with each increasing age category reducing the weight of the armor by another 10%.

There's probably some conflicts with Low-Tech in it and I may update the file to get rid of them. If anyone has other issues or suggestions for improvements, they can be emailed to me or added to the comments below.

Posted by Mark Langsdorf at 1:26 PM