The Role of Wizards

In the online game I play in, one of the players just introduced his new wizard character. But he hadn't been happy with the existing GURPS Magic system, and he and the GM were unsuccessfully trying to cobble together a better system (Threshold limited Realm magic influenced by Ritual Path Magic or something) more or less on the fly. It was quickly moving to end in tears, and we convinced the player to play his old ninja instead.

As part of the discussion of the magic system, we asked, "What is the role of a wizard in a delving band?" There's a lot of ways to answer that question, but I want to lay out something I think is a common view.

What Should a Wizard Do

A wizard is a master at dealing with the weird stuff: magical items, magical traps, magical foes. He has less utility against mundane foes. 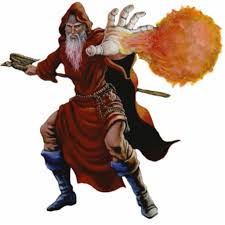 What a Wizard Shouldn't Do

Part of the problem with most RPG magic systems is that magic quickly becomes a license to do everything, eventually leading to the failure of quadratic wizards, linear fighters. Magic needs limits, and there should be some things that a wizard doesn't do.

How Does the Dungeon Fantasy Wizard Stack Up?

If the role of the wizard is to deal with diffuse and other weird foes, crowd control mundane foes, and not steal niche from thieves, martial artists, and scouts, then the DF Wizard is a mixed bag.

On the plus side, spells such as Concussion, Flash, Shape Earth/Air/Fire, Stench, Grease, and Glue make the wizard good at mundane crowd control. Most wizards have access to a variety of elemental effects, and can help exploit elemental vulnerabilities. Wizards know about magic.

On the down side, the ability to build up massive 9d+ missile spells means that wizards can potentially deal devastating direct damage, though very slowly and with low hit chances. Wizards can scout by casting Invisibility and Mage-Stealth, though it's probably more useful to cast those spells on a Scout or Thief and let them sneak ahead. They can also Created Servants to find traps or danger, but those Servants aren't really good for finding some of the weird traps or noticing anything hidden.  Constantly renewable fatigue, low prerequisite chains for useful spells like Lockmaster or Walk on Air, and low energy costs for those spells means that wizards can easily bypass obstacles and invade other people's niches.

Most regrettably, wizards aren't amazingly good at dealing with diffuse foes. Explosive missile spells take a lot of time and energy to cast in order to reliably deal with a single diffuse foe. A Mystic Knight with Shockwave (Bow) can do 1d+4 im exp to diffuse foes every round or two for a single fatigue point; a wizard casting Explosive Fireball is spending 2-3 FP for the same level of damage.

My article on Rationalizing Damage Spells addresses several of these issues, and using Threshold Magic (to force wizards to ration their power on a daily basis) and/or increasing the costs of some of the more problematic spells (Lockmaster at 12 FP is only going to get cast if the thief is dead) would do a lot to address the others.

Posted by Mark Langsdorf at 7:16 AM