Epic Fantasy: What To Do? 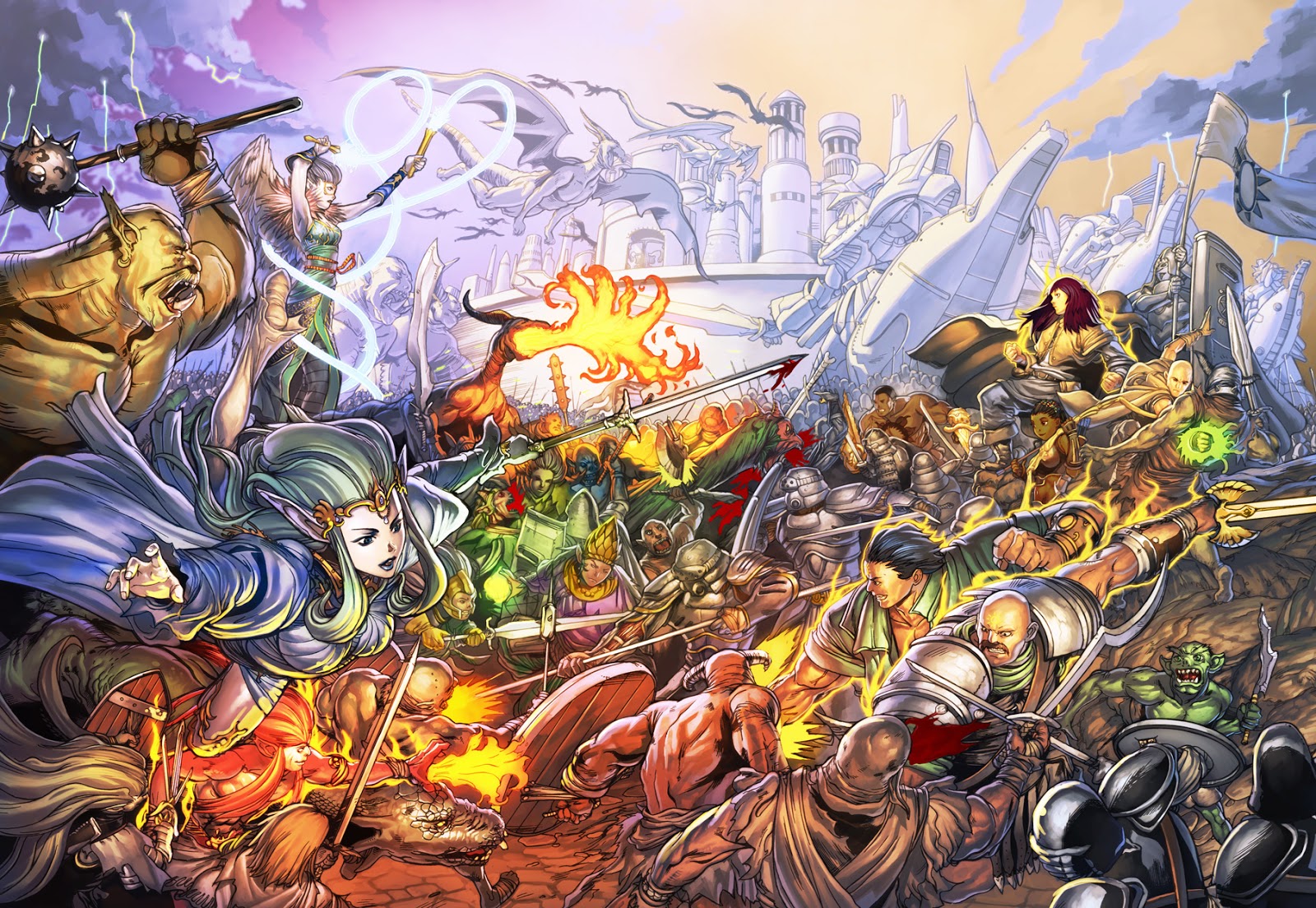 There was a little commentary on my article about playing an Exalted type game with GURPS, and the most relevant question was, "what do you do?" I confess that I tend to veer away from that kind of question, at least at first, and get too caught up in the mechanics of character creation and the like. But it is true that heroes are only really defined in relation to their opposition, or at least the challenges they face, and I should probably spend a few minutes thinking about the question.

There's a lot of things I know I don't want in the game. First off, much of the typical DF style beginner wandering murder-hobo experience is right out. This shouldn't be a game about common bar fights, trawling taverns for rumors, counting coins, or dungeon delving. All those can be enjoyable experiences, in the right game, but not in a self-consciously awesome and epic game. At least, if there's going to be a bar fight, it'll need to be an epic brawl against giants in the halls of the giant king, something more akin to the Norse Sagas when Thor wrestles Death.

Similarly, I don't know exactly who I'd want the Big Threat to be, but I know what it can't be: an invasion by orcs, demons, or the undead. Standard 250 point DF adventurers can handle an invasion by orcs, so that's not a strong enough foe. If all or most of the enemies are demons or undead, that encourages everyone to load up on anti-demon or anti-undead abilities, and I've already seen enough DF encounters shut down by a cleric with a lot of Will and True Faith (Turning). Demons and undead can be occasional foes, and almost certainly should be, but they can't be the enemy main force.

So I know some of what I don't want in broad themes. I should also think about some individual pieces that I do want, and see if they assemble from the bottom up into a picture of the Big Threat.
Already I'm seeing the outlines of a MacGuffin hunt, and possibly a conspiracy of some sort. Given the common types of foes I've already ruled out, something involving Elder Things seems appropriate. And honestly, stopping the awakening of Cthulhu or the King in Yellow does seem like the kind of epic quest I've been suggesting.

The Use and Abuse of Prophecy

It's a personal thing, but I find prophecies in fantasy stories to be horribly overused. Chosen heroes guided by fate... I find that really, really boring. Even the relatively light hand of prophecy, like the vague and self-fulfilling prophecies of Harry Potter, or the uncertain version used in David Eddings' books are not my cup of tea.

Still, there is space for predictable events influencing events. If the Eclipse of the 9 Moons is next month, and everyone knows that Elder Things are easiest to awaken during that Eclipse, then it's pretty reasonable to suspect that various shady and crazy groups might be plotting to do dangerous things. It's not some cryptic prophecy from the past, but something more like knowing that Haley's Comet will return in 2061.

Putting this all together, I get something like for a pitch:
"An obscure sage has finally located the ebon moon Arkis, and plotted that the Conjunction of 9 Moons will occur in a few months. The borders between reality and the Far Realm will be at their weakest, and cultists of the Star Spawn will surely be plotting to bring their abominal mockeries of gods into the world. Sightings of agents of the Dragon-King of the North have increased, and those mad assassins are surely preparing the dark ritual sites.
"The sage has called out to some of the great heroes of the Age, for the fate of reality itself is at stake. He has gone to the temporal rulers, and been roundly mocked, for there is always some crazy monk proclaiming the end is nigh. But some heroes have realized the truth of the sage's words, and now seek to derail the Dragon-King's many plans."

It still needs some refinement, but it's a good start. It covers who the big bad is (Dragon-King of the North) and what the overall threat is (invasion by Cthulhu and company). It hints at the enemies (mad cultists of varying power levels) and the tasks (discover and destroy their ritual sites). It even plainly states that the Dragon-King has more than one plan, so it isn't sufficient to just stop one thing: he's got fall-backs and alternates, and even if he doesn't summon Cthulhu he can still summon Hastur or whatever and it's nearly as bad.

One thing I'd definitely want to make clear in the extended prospectus is that the sage is absolutely playable as PC. It's not mandatory, but I think people at this level, even when they're responding to events, should still be driving their own destinies. There's an important difference between "Elminster the quest-giver told you to go solve a problem" and "You realized that there was a problem that needed solving and set out to solve it." In the first case, the PCs are minions. In the second, they're movers and shakers, acting on their own accord.

"But are these things that DF templates can do without the superhero approach?"

Did I answer Shawn Fisher's original question? Did I even address it? I don't think I did.

So if I scaled down the opposition to a bunch of cultists led by a ninja, I could probably run most of this game with standard DF characters. But since a typical encounter might be a bunch of Siege Beasts and armored Stone Golems guarding a Mind Blaster Lich while a few Watchers at the End of Time perform hit-and-run attacks, which is pretty unreasonable for most DF groups.
Posted by Mark Langsdorf at 10:50 AM