The concept of Exalted in GURPS 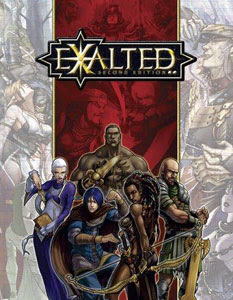 Exalted is the former White Wolf's game of over-the-top superheroes in fantasy garb. I'm on record as not liking it very much, finding it mechanically clunky and too complex to meaningfully GM. I'm not enthused about the background, either, which was probably useful in the first edition of the game but has gotten overly baroque over the years.

Still, there are things about the concept that I like. It's an over the top wuxia game with a mostly European sword-and-sandals aesthetic. And the Mecha Against the Giants campaign has really reinforced to me that cinematic, high powered, deliberately awesome gaming can be a lot of fun in an escapist kind of way. So I'm mulling over an Exalted type of game in my favorite system, GURPS.

There have been a couple of attempts to port Exalted over to GURPS, but they're pretty much useless for my purposes. The biggest problem with them is that they're all trying to port Exalted, as written, to GURPS, instead of doing a loose translation into GURPS of the flavor of Exalted. As such, they carry over a lot of the fiddleness and wacky rules of Exalted, like tracking (energy) motes and perfect defenses.

The basic concept is super powered sword and sorcery, so the place to start is probably Dungeon Fantasy. DF templates are 250 points with attributes in the 10 to 17 range, and almost everyone having DX and HT of 12+. If every archetype had to double it's ST and add 2 to DX, IQ, and HT, then most templates end up costing around 450 points and look reasonably superhuman: the jack-of-all-trades bard is ST 22 DX 14 IQ 16 HT 13, while the powerhouse barbarian is ST 34 DX 15 IQ 12 HT 15 (at ~500 points) and the martial artist is suitably intimidating at ST 22 DX 18 IQ 12 HT 14.

Of course, big attributes aren't enough for this kind of game. Giving every another another 150 points and requiring them to take Combat Reflexes, Injury Tolerance: Damage Reduction/2, Luck, Trained by a Master, and another 30 points chosen from Damage Resistance 1-6 [5/level], Destiny 1-3 [5/level], Enhanced Dodge 1-2 [15/level], Extra Basic Speed 1 [20], Extra HP 1-15 [2/level] and Hard to Kill 1-10 [2/level] should increase survivability nicely. Another 100 points of non-attribute power-ups or skill increases from the template further reinforces these characters as masters of their professions.

Finally, although I'm basing this game on Dungeon Fantasy, I'd like to be more than just a stomp and romp game. All the templates are now IQ 12+, so having some social skills should be reasonably affordable. Another 50 points must be spent on Influence skills and mundane, social related abilities like Attractiveness, Social Regard, or Status.

That puts everyone at about 750 points, which seems like a good place for a super powered game.

I think giving wizards IQ 17 and 165 points to spend on more IQ and Magery is going to result in a lot IQ 18, Magery 6 characters. Which will in turn intensify everything I dislike about the standard magic system. Even my own College Ritual Book system is possibly not appropriate for this kind of game, since IQ 18 wizards can master a lot of different colleges on the cheap. I'd prefer spellcasters to be a little more focused.

I think spells as powers is the right way to go here. Divine spellcasters can use Divine Powers, which works well for them, and with Divine Favor 14 being easily in reach, they can part the seas or call down insect plagues on a daily basis. But they can only do one thing at a time, though it's usually a big thing. Arcane spellcasters can have multiple arrays of powers, so they can do different things (fly and throw lightning bolts, for instance) at the same time, but their biggest effects are probably smaller than clerics.

Obviously, this needs a lot more development, but it's a good place to start.

Big heroes need big gear. I'd use Better Fantasy Armor as a base, of course, but how much money to provide? Top of the line BFA armor costs $700,000 for DR 15 + 3* and weighs 38 lbs, which isn't even light encumbrance for ST 20 heroes. Forbidding the Lighten enchantment increases the weight to about 77 lbs at no real change in cost, and possibly discourages the ST20 people from wearing it. I don't mind players wearing Ultimate Celestial Armor, but I wouldn't want it to be the default option: it should be something that someone chooses and gives up other things for (ie, has to buy Wealth to afford).

With that in mind, I'm thinking a starting wealth of $200,000 sounds good. Everyone can trivially buy a mithril mail undersuit ($80,000 and 9 lbs) with light dragonhide over it ($25,000 and 14 lbs) and still buy plenty of other equipment. A half dozen points in Signature Gear is enough to get a Celestial Steel ultimate harness ($600,000 and 65 lbs) for someone who wants to make the investment.

This is a good start on a concept. I need to refine it a bit more: should Super Jumping be added to the mandatory advantages or does that take too much away from the Martial Artist? Is this the level of over the top that I want, or would even higher attributes and skills help anything? Is there room for a character in magitek powered armor, and if so, how to approach that?

I also need to clarify some things. I tossed off "wizards use powers for spells" but there's a lot of background work that would need to be done before I could hand that to a player and let them make a character.

I also need to figure out what kind of adventure I'd want to run. I've bitched before that epic scale D&D too often fails because in the end, the writers idea of epic is "the exact same fight you had at first level in the exact same basement room, only with bigger numbers." But I think epic is more flying to the moon or shooting the sun from the sky. So I'll need to ponder that some more.
Posted by Mark Langsdorf at 11:38 AM