My online group met last night for another session of Castle of Horrors. +Nathan Joy had to stay at work late, so he couldn't make it, and +Douglas Cole was preparing for surgery after his abortive career as as a gasoline powered launch vehicle, so the game was a little unfocused. Still, we managed to deal with the gargoyles, do a little exploring, meet some friends, and figure out where people were camping for the night. It was a decently productive session.

As usual, we started where we had left off last session: with the PCs kiting the gargoyle's from the octagon room to the chapel. Almost everyone had a rifle out, and fired away at the gargoyles. Thanks to Aim actions and rate of fire bonuses, they generally hit, but the hollow gargoyles didn't have vital organs so the bullets weren't particularly effective. +Uhuk of the Guard's character Ryan was fleeing into the chapel and being overtaken by the gargoyles, who would try to hit him as they flew by, but he mostly ignored their hits.

Things changed when +Kevin Smyth's character Raleigh threw an Explosive Sound Ball - something of a misnomer, since the spell is really just an area effect spell at a distance. Still, it did decent area of effect crushing damage, so it actually hurt the gargoyles a fair bit, and more to the point, it knocked them back. Gargoyles are clumsy flyers, and though they are heavy, they don't have much resistant to being tossed around while in the air. Two of them face planted for minimal damage. Since some of the gargoyles had been slowed already from previous damage, it meant that the gargoyles were now strung out and arriving one at a time at the PCs' firing line, instead of hitting en mass.

The first gargoyle reached the firing line and grabbed (but missed) Yusef's gun. The gargoyle behind him managed to dodge the "Endor" trap made from a throne dropped off the balcony above the door, but the next one tried to dodge under it and clipped the floor and then nearly had its wings torn off by the throne-pendulum. Meanwhile, concentrated gunfire from the firing line finally killed a gargoyle, and it shattered into a pile of worthless rubble.

Raleigh cast another spell at this point, imbuing the bullets from Douglas' character Neil's gun with an energy sheathe that did decent damage to the gargoyles. He started lighting them up, and the next batch of gargoyles streamed toward him to try to steal his gun away. One of them got a decent grip on it, only for Raleigh's boyfriend Jamie to start hacking away at it's arm, while Neil himself used the fact that Technical Grappling grapples are two-way: he put the gargoyle in an arm-lock, using his captured rifle as a lever. (Doug claims that he's trained in his martial arts classes to do a similar trick when someone grabs the short staff he's wielding.) That gargoyle got hacked to pieces before it could do much else.

From that point on, the battle shifted pretty decisively in the PCs' favor. Raleigh got punched once, but her refurbished plate harness absorbed the blow (though she herself got knocked on her ass from transferred momentum). The badly wounded gargoyles, even with HT 14, started critically failing HT checks to stay conscious, and I just marked them as dead. We were quickly down to one nearly unwounded gargoyle brawling with Ryan and a pair of heavily shot up ones at the gun line, and I called the fight: the PCs won without taking much more damage.

The reason I called the fight was because the outcome wasn't in doubt and finishing it would take up too much time. And honestly, there are so many strange and bizarre things in the Castle of Horrors that I want the PCs to interact with. Every minute that they spend dealing with a nearly played out encounter is a minute that they're not dealing with the other dangerous oddities. It's the same reason I cut the role-playing short last week.

Where Do We Go Now?

After bandaging themselves up, reloading, and resting a bit, the group had a decision to make: where to go next? They decided to return to the octagon room, now that they could safely move through it, and investigate the doorway to the south, opposite the stairs they'd used to flee from the gargoyles in Session 2.

That doorway led to a dusty and cobwebbed dining room, lined with grimy mirrors. There was a brief discussion of stealing the silver backing from the mirrors (it was a large room) but since silver isn't worth anywhere near as much as gold, they backed down from that. +Theodore Briggs's character Thomas did meticulously search some old china cabinets, and found a large case of silverware beneath a false bottom in one of the drawers. They eyeballed the 20-30 pounds of sterling silver as worth somewhere between $4000 and $8000, and figured that was a pretty good haul.

Thomas also found a secret door behind one of the mirrors that led to a guard corridor. The corridor was lined with rusty and worthless weapons and went around the outer perimeter of the keep before ending at another spiral stairwell. Since that stairwell stunk of rotten eggs, they avoided it. After a bit more discussion, they went up the grand staircase on the north side of the octagon.

The stairway led to an intermediate platform between levels 1 and 2, guarded by another pair of sharkfaced Void Brutes. Once again, a fight didn't break out, somewhat to my surprise. One of the void brutes grunted at the PCs for a while, before suddenly standing up straight and inviting them upstairs in a much more cultured and polished voice. After that, it reverted to a slightly hunched, looming and went back to grunting. 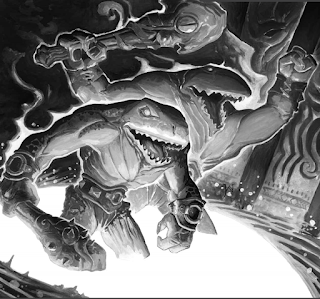 Kevin (or maybe Raleigh?) noted that they'd just seen a clear case of mental possession, and no one was happy about going into a possible mind controller's lair. But they also didn't want to turn their back on the void bruttes, so up they went.

The mind controller's lair was the castle's throne room: a huge room with a massive gilt throne on the south side, surrounded by weird mystic circles. The mind controller himself, a robed man named Donald, asked them what they were doing in his castle. He claimed to be the Keeper of the Castle, but was mostly focused on his research. He believed that the throne was an artifact that gave its controller immortality, based on the fact that the accountant in the next room didn't sleep, eat, drink or age.

I'm not sure how the PCs felt about Donald, but he was clearly obsessed with the throne and unconcerned with the rest of the castle. He also offered the a 1 ounce gold coin to go down to the goblins and buy him some rations, since the goblins refused to do business with his void brutes and he didn't want to disrupt his research to do it himself. The PCs took his money and gave him their own rations, because it's worth being hungry for a day or two to earn $1000. When Donald had nothing more to do with him, the PCs excused themselves and headed back to the first floor.

Stop For The Night

I'd pointed out in email that the Icon took about 50 hours to recharge, and it seemed most likely to me that they'd activated on Friday afternoon with a plan to return to the Real World on Sunday evening. As such, they'd spent about four hours exploring and fighting gargoyles, and needed to think about where they were going to sleep.

No one wanted to stay in the courtyard for some reason, and the poorly fortified chapel was ominous and hard to secure. Someone suggested the dining room, but in the end they went with the hall between the chapel and the octagon: plenty of space, but only two doors and both opened inwards and could be easily blocked. Thomas spent some time stringing noisemaker traps around the chapel entrances and Ryan blockaded the hallway doors. Both of them saw a leprechaun in the chapel courtyard, who proceeded to turn invisible when he saw them looking, and both of them noted that his footprints were disturbing the grass in a path heading east toward the overlook, but neither of them decided to deal with it then. Instead, we closed up for the night.

The fight in the chapel went surprisingly well for the PCs. The gargoyles had a surprising number of critical failures on defense rolls and rolls to maintain consciousness, but they also never failed an attack roll to grab a weapon, even though they only had a 50% chance of doing so successfully. So I guess that balances out. I had really expected the PCs to have flee again, and was looking forward to turning the gargoyles into some kind of near mystical threat, but it didn't happen.

The rest of the session went well enough. One thing that I'm appreciating is that this game isn't Dungeon Fantasy, and the PCs have quite the same adversarial attitude toward the dungeon's inhabitants. They've been willing to talk to anything that wasn't actively attacking them, which is nice. Later conversations show that they don't trust any of the dungeon's inhabitants, which is wise. But it really does make a nice change of pace from the "kick down the door, attack anything that moves, only negotiate when the odds are bad" method that we got used to when we were playing a conventional Dungeon Fantasy game.

I'm still a little disappointed that no one is stepping forward to keep the group organized. I'm finding myself asking "what are you doing NOW?" a bit too often. Some playgroups manage to keep focused and some don't, and I think this current one is one of the latter groups. It's not a huge problem, but again, there's all kinds of encounters that I am anticipating them experiencing and that doesn't happen when they're all silent and not moving forward.

For once, Skype and MapTools behaved themselves for most of an entire session, though Kevin was disconnected from MapTools randomly at one point. Fortunately, it wasn't an important part of the game, so no harm done aside from some confusion.

The PCs have forted up for the night, and they managed to pick a pretty decent location. Veterans of the original Ravenloft module might recognize that their location isn't perfect, but really, no location is. Assuming they survive until morning, I think they're going to move on to exploring the second and third floors. They've already been through parts of those levels, so that may go fairly fast, and then they're going to have to decide if they want to go up the towers or descend into the basement. Given that the basement is already known to be either stinky or filled with spiders by giant spiders, I suspect they'll go up before they go down.

For myself, I need to finalize my plans for what happens to them overnight. The rest of the castle is mostly stocked and I just need to clean up a few places. Stocking a large dungeon is never done: there's always something else you can polish up a bit. Still, I'm in good enough shape for now.
Posted by Mark Langsdorf at 8:34 AM