Technical Grappling: How does a Disarm work?

In Wednesday's session of Castle of Horrors, there were two instances where a gargoyle grabbed a PC's weapon. In both cases, the PC's surrendered the weapon rather try to fight for it. There were a bunch of reasons why they made that choice, but I'm curious about what might have happened if things had gone the other way. 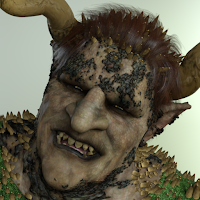 The gargoyle has ST 16, DX 11, Wrestling-14, and the disarming technique at +4. It has a Dodge of 9 and a Wrestling Parry of 10. It inflicts 2d+2 CP on a normal grappling attack or 3d CP when grappling to disarming.

The Play by Play

Ryan uses an all-out attack to shoot a gargoyle, and does nothing effective.

A different gargoyle uses a Committed (Determined) Attack to double-step into Ryan's hex and grab his gun. The gargoyle successfully makes his attack roll at -7, and since Ryan can't defend, rolls 3d and inflicts 11 CP.

The gargoyle has 11 CP on the weapon, giving Ryan a -3 DX for using it, and reducing Ryan's effective ST to 19. Ryan wants to keep his gun - he's Struggling, and guns are expensive - so he's going to try to break the gargoyle's grip. He selects an Attack maneuver and uses Retain Weapon, defaulting from his Guns skill of 14, rolling a 9 to hit versus a target of 11. Normally he'd have to use his Wrestling skill, but since he's resisting a disarming attempt, he can use Retain Weapon instead. The gargoyle attempts a parry, but fails with a roll a 9 versus a target of 8 because Committed attack gives a -2 penalty to defenses. Ryan rolls 4d-5 for inflicted CP, and reduces the gargoyle's grip to 3 CP. Ryan doesn't quite have his gun back yet, but he's no longer at a DX penalty and is only at a -1 ST penalty, so things are looking up for him. 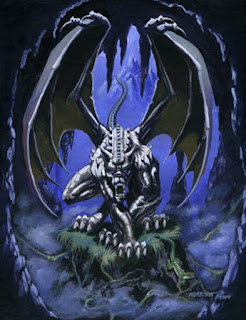 The gargoyle wants to take the gun away, but it's in a hurry, so it goes for an instant disarm. It spends 1 CP and rolls an ST based contest of Disarm versus Retain Weapon: 16+7+1 (24) against Ryan's 24-1+1 (24). The gargoyle rolls a 12 and Ryan rolls an 11: Ryan wins, but barely, and so the pistol is no longer ready. If the rolls had gone the other way, the gargoyle would have pulled the pistol away. As it is, the pistol isn't ready and Ryan has 9 CP on it; the gargoyle has 2 CP left and is still maintaining a grip.

Ryan probably should have spent some CP from his grip CP to keep control of the gun - he only needs 1 CP to hold it and 6 CP to keep it ready, and even spending 3 CP would have been enough to keep the odds in his favor. On the other hand, spending grip CP increases the chances that the gargoyle would take the gun away from him, and does nothing to break the gargoyle's grip on the gun.

Ryan makes another Retain Weapon attack to get control of his gun. He rolls an 11, and makes the attack roll easily, but the gargoyle gets a 10 to parry and cancels out Ryan's attack.

The gargoyle wants to improve its position before going for another instant disarm. It attacks with Wrestling, rolling a 13 against its skill of 14 (no target penalties since it has already grabbed the gun), and Ryan blows his parry by rolling a 16. The gargoyle rolls very well on its damage, and inflicts 13 CP, getting an excellent grip on the gun! If the gargoyle had just attacked to reduce Ryan's grip, it would have reduced his Grip CP below 0, and Ryan would have lost the gun at this stage, so this might have been sub-optimal for the gargoyle.

Ryan still has 9 CP on the gun, but now the gargoyle has 15 CP and is giving him -7 to ST and -4 to DX. He decides to add a second hand so he'll plenty of CP for the next contest. He attacks with Wrestling, with a -2 penalty for referred CP, and fails with a 14.

In a 1 on 1 fight, Ryan might have been able to keep control of his gun - or he might have spent several seconds struggling to hold onto it, only to lose it anyway. So maybe +Uhuk of the Guard  made the right decision in not even bothering to struggle for Ryan's gun. At the time, Ryan was being surrounded by multiple gargoyles, and all of them were grabbing for his weapon or punching him, and only deft retreating and burning lots of Fatigue for extra effort defenses kept him from being bashed into pulp. He wouldn't have been able to retreat and dodge while spending several seconds stationary to struggle over the gun.

That said, the rules for disarming worked reasonably well. There was certainly a struggle, and it wasn't a forgone conclusion: if Ryan had been a bit better at grappling, or if the gargoyle hadn't been an absolute master of disarming, Ryan might have been able to retain his gun.

I still find Technical Grappling to be confusingly written in places: it took me a couple minutes of searching to figure out the penalties for Ryan trying to put his second hand on his gun and for the gargoyle to attack to increase his CP. It's manageable, but I wish there had been a step by step list of the components of a standard grappling attack and the possible modifiers. Something like this:
Obviously, that needs more detail. But it would be great to have all the conditional modifiers in one place.
Posted by Mark Langsdorf at 4:10 AM

Email ThisBlogThis!Share to TwitterShare to FacebookShare to Pinterest
Labels: GURPS