Once again, this level is a mess of questionable design decisions and shoddy mapping. On the plus side, it doesn't include toilet humor or questionable instant kill traps.

The temple entrance is above ground, north east of Rappan Athuk itself. A 5th or 6th level party, which could probably handle the Rappan Athuk main entrance, could just stumble across the Temple while mapping the surrounding wilderness: it's less than 5 miles off the road. There's no indication that the temple entrance leads to a particularly deadly dungeon, so the first sign of danger might be the bone crawler in the first room.

The bone crawler looks like a pretty nasty closet troll to me, capable of delivering 4 attacks on each of 3 different PCs and doing 1d8+5 per attack, and hidden behind an illusionary wall. It's probably not too difficult for a 10th level party, but it might be a nasty surprise for a 5th level party. 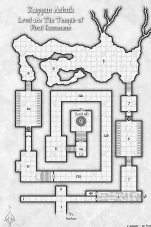 The temple consists of fifteen rooms, laid out in a spiral. There's no real choice: move on to the next room or don't. Each room consists of a nasty guardian: some kind of fairly powerful monster usually backed by a trap.

There's a poem outside the temple that very vaguely alludes to each of the guardians, and the text says "perspicacious characters may realize this to their advantage" but I'm not really sure how. Even looking at the poem and the GM text for each guardian, I can't see how it helps. The stanza for the third guardian reads as follows:


"NOT IN THE FLESH, MERE MEAT TO ROT TO NOTHING; LET THE WORMS FEAST UPON IT."

and the third guardian (flesh) is an ebon ooze, a new variant of the black pudding. It takes full damage from fire and force attacks, is stunned by cold attacks, and doesn't split when attacked by slashing weapons like black puddings do. It isn't specially vulnerable to worms and I think a party is supposed to blow through all 104 HP with weapon attacks. Nothing about the stanza suggests ooze to me, and nothing about the stanza tells me how to defeat the ooze even if I know what it is.

Later on, there's a riddle "what is the third sacrament?" that can supposedly be answered by the fourth stanza of the poem. The poem is the Epitaph of the Final Sacrament, so there's no particular reason to think it's relevant to answering a question about the third sacrament. 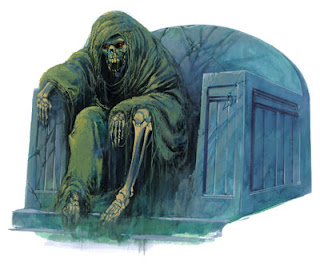 The climax of this level is a 5th level Sorcerer that is also a Crypt Thing, protected by a lesser globe of invulnerability. I'm not sure how much of a challenge that is for a 10th level party, but I suspect its not that challenging. There's some confusing text about how its magic throne revives it after a few days unless the throne is destroyed and the room is hallowed by a spell, but also that the throne loses its magic if removed from the room. I suspect that's an editing error in that the "all magic" refers to the throne's constant defensive spells, not its vaguely defined ability to revive the Crypt Thing.

There is an option to communicate with the Crypt Thing, which I note mostly because she has perhaps a paragraph of backstory.  If this were a Paizo product, the backstory would take up a page and a half and would displace other, more useful information.

This is a terrible level. There's some justification for why it's a simple linear trek through a bunch of challenges of varying difficulty, but time spent coming up with that justification could have be spent making a more interesting design. It's just boring.

And given that there's no evidence of a time limit, there's no reason for a moderately intelligent party to not take it one room a day, and alpha strike with all their best spells on each room. That's another piece of bad design. I'm sure the designers of Rappan Athuk would have some kind of hostile GM response to a group of PCs approaching it that way, and even though I would loathe that response, I wish they had gone ahead and put it in the text of the adventure.

Posted by Mark Langsdorf at 6:20 AM