Another Monday, another level in my read-through of Rappan Athuk: Reloaded. Level 2 is bland and uninspired, but bad not bad in the way the previous levels were: it's not completely linear, has no inexplicable death traps, and doesn't involve toilet humor. It doesn't really have anything going for it, but it's still an improvement.

Level 2 is officially titled "Marthek's Place & Ambro's Base," but that doesn't amount to much. It's mostly a square made from long hallways, with several complexes of a few rooms off one side or another of a corridor. The map itself is dull and I doubt these would be memorable levels of a campaign.

The rooms themselves feel unconnected to each other: Marthek is avoided by the other creatures, the moody skeletal warrior lair stays in his crypt, and Ambro the ogre doesn't go on patrol. Some dungeons have an organic quality to them, and a sense that things might be happening behind the scenes. Rappan Athuk doesn't have that quality or sense, even though the text refers repeatedly to the evil priests on level 4 who are supposed to go around resetting traps and using charm spells to produce new minions. Instead, every area is its own encounter, and there's no sense of what the "Dungeon of Graves" was before it because a monster infested hole in the ground.

There's nothing in this level that really ties it to any other level of Rappan Athuk or to the dungeon as a whole. It could easily be replaced by something better if a GM wanted to put in the work, or it could be painlessly removed and inserted in some other dungeon, though why anyone would bother is beyond me.

Given that the name of the level refers to these two, you'd think they'd be impressive or memorable. They aren't. They're completely forgettable. The most interesting thing about either of them is a map which is a pointer to a different adventure by the same people. If the most interesting part of a published encounter is a suggestion that the party go someplace else, then that encounter has real problems.

Marthek himself is a barbarian, once chaotic good and now cursed to be chaotic evil by insanity. He can be cured, but since he attacks on sight and there aren't any rumors about him, I doubt most players are going to try to cure him. More likely, he's going to get hit by a Color Spray or Hold Person or just beat down thanks to the action economy. Without a lot of work from the GM, no one is going to remember him by the end of the session.

Ambro is an ogre, leading a group of 4 other ogres. There's a little bit of pointless color in his room (coins lined up heads or tails as the ogres sort them) that I can't tell is amusing or slightly crass but either way doesn't add much to the encounter. It's nominally a fairly high level encounter but I would expect most PC groups that got this far into the dungeon to handle it with ease.

Saracek the Badly Boxed Off 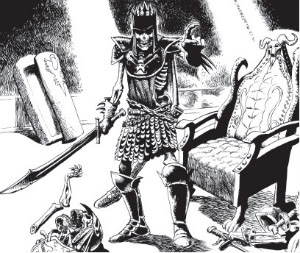 Saracek is the previously mentioned skeletal warrior. The module text frankly states that low level parties shouldn't enter his crypt, but the lock is only DC 30, so a reasonably competent 3rd level thief should be able to open it. I assume this is more of Rappan Athuk's general difficulty in converting to D&D 3rd edition, but it's still a bit sad that they couldn't even manage to prevent a low level party from getting into it.

Also annoying is that there's a warning at the door, written in such a way that a character needs to know both the Celestial and Infernal languages to read it. Depending on the campaign, that might not be combination of languages that anyone in the party can manage, in which case the warning is useless. Even if the party can read the warning, "in death a dark warrior-king" is probably not sufficient information for a party to determine that there's a skeletal warrior beyond the door and evaluate whether they're good enough to defeat him. So the entire warning is most likely a waste of time.

The map shows that rooms 10 and 20 have exits to the surface. I had to read through the room descriptions twice to find the text for the relevant tunnels. Room 10 exits to "a cave" but doesn't specify where the cave is on the surface map, and the text for the wilderness section doesn't mention this entrance either. Room 20 also just exits to the surface with no location specified, but has the added benefit of having a second tunnel descend to level 4 without specifying where on level 4 it goes. The level 4 map has a tunnel that goes to room 20 on level 2, so that's answered, but the room description for the area near the tunnel doesn't mention the tunnel or the passage to level 2. It's just shoddy. 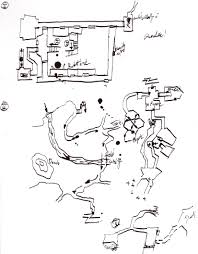 This isn't a terrible level, which as I said, makes it better than the previous couple of levels. But it isn't a great or even fairly decent level either. It's nothing that any GM couldn't come up with in a couple of hours of work with a random dungeon generator, a copy of a Monster's Manual, and a sheet of graph paper. There's not a single interesting setpiece, trap, or random encounter in the entire mess.

Hopefully, the rest of Rappan Athuk will be better. At this point, I really think Keep on the Borderlands is a more interesting dungeon to play in, and more useful for a GM as either inspiration or a learning tool. Rappan Athuk has nothing going for it.