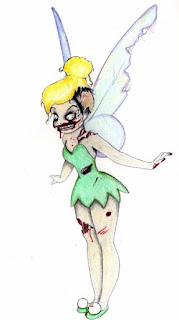 I ran the thirteenth session of Castle of Horrors last night. It was a pretty good session: a couple of decent combats, a little running away, some friendly interaction with NPCs, and a bit of exploration. Plus, it introduced one of my new favorite monsters, the pixie ghoul.

Murder By the Numbers

We picked up where we left off: the PCs were fighting a pair of Spheres of Madness, who had grappled and beat up +Kevin Smyth's character Raleigh and +Eric Schmidt's character Quanah. The remainder of the fight went pretty much as expected: +Uhuk of the Guard's character Ryan would hit a Sphere with an enormous sword swung with troll strength and knock it into the negative HP range. Then everyone else would fill it with lead until it died.

Two bits stood out: one of the Spheres grabbed +Theodore Briggs' character Thomas' edged shield, and there was an extended out-of-character chat discussion about creatures that grappled and did damage in the same attack and also about whether it was realistic for a creature to grab an edged weapon (given that Spheres have DR6, I wasn't too concerned about this). The other bit was when the last remaining Sphere voluntarily dropped Raleigh on the floor in order to increase its movement speed to close with Ryan while keeping acceptable defenses. It eventually managed to grappled the troll, but then Ryan punched it a bit and Thomas put two slugs through it. The slugs were slowed enough to bounce off Ryan's armor with minimal damage to the troll.

After that, there was a round of first aid and healing magic. Raleigh burned Destiny Points to perform a Great Healing on Quanah, and Quanah and +Douglas Cole's character Neil burned Destiny Points to avoid a critical failure when Quanah used Faith Healing on Neil. Unfortunately, Neil doesn't have any Luck or Destiny Points normally, so he had no recourse when hit critically failed the recovery check for his crippled left arm. Apparently his dependent Angela's bullet destroyed the bone and Great Healing didn't fix it, so Neil now has the One Arm disadvantage. Raleigh has made some vague noises about casting Instant Regeneration at some point in the future, but she's well past her Threshold and would prefer not to explode.

As an aside, I'm probably going to rule that while you can use Destiny Points to critically succeed on spell-casting rolls out of combat and thus cast the spell for free, doing so will still trigger a Calamity check if you would have gone over your Threshold. It will keep things slightly more in line as opposed to letting Kevin cast one or two huge spells per session.

Welcome to the Neighborhood

Kevin was the designated decided, so after healing up, he decided the group would search the cave. Poking around, they spotted a barnacle encrusted form under the water, and Ryan was dispatched to examine it (being the best and strongest swimmer). That turned out to be the missing fifth drider: a knight of some kind who had apparently drowned in his heavy armor. Ryan looted his coin pouch to get a wealth of gold and silver and the group moved on.

The river they were in led west to another cave. This cave was apparently on a ledge of an enormous cavern, and beyond some incongruous buildings, they could see a bit of a floating castle. There was some daylight coming from a shaft in the cavern roof. They took that all in and decided to cross the river to explore a building to the south which was oddly labeled "Rebus Publi": some joked about needing to murder Donald Trump if showed up were made. 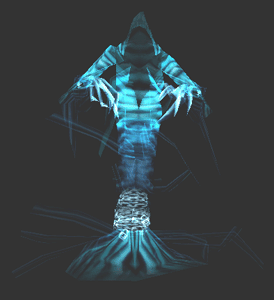 Inside the building, they found four spectral guards and a spectral clerk behind the counter. Thomas began frantically laying anti-ghost barrier cord across the doorway while the clerk addressed Raleigh's ally Jamie, demanding payment of late taxes. Jamie tried to bluff his way out, but the spectral guards attacked him, freezing him a bit as their insubstantial hands went through his corporeal body. Jamie retreated past the cord.

There was a quick discussion, and the consensus was that they didn't have the right abilities to fend off ghosts. The ghosts were forcing their way past the ethereal barrier, but Raleigh reckoned that ghosts couldn't cross running water, so the group quickly evacuated back across the stream. The ghosts chased them to the stream edge, couldn't cross it, eventually forgot what they were doing, and returned to the tax office.

Undeterred, they checked the other buildings. To the northwest, they poked their heads through a window into the room of a remarkably self-aware ghost sage, standing in the burnt ruins of his former library. He yelled at them to get out, or to at least come in properly through his front door, and demanded reference books to replace his lost tomes. He didn't attack them, so Raleigh counted it as a successful encounter. 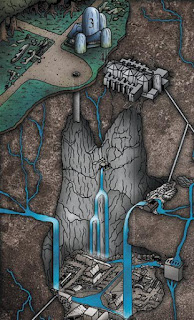 Crossing the street to the east, they got a good view from the cliffside. Below them were the mist shrouded ruins of a city, a sight not nearly as interested as the huge black skull to the southwest. Clearly, this was an excellent place to explore. Kevin dithered for a bit, because the cliff was possibly climbable, but Ted argued they should find a way back to the Castle before exploring places that didn't include a way home.

They also found a dead body with a silver necklace. Thomas put down the last of his anti-ghost cord around the body, expecting a ghost to pop up when they stole the necklace, but it was wasted effort. The necklace identified the ghost as a "Publican," which prompted Raleigh to remember that was the ancient Roman word for tax collector. Sadly, they didn't find the tax payment under the body - just a mangled key that Thomas took, assuming it would have opened the door on the other side of the counter in the tax office.

Crossing the street again, they entered the sage's office through the front door, and he agreed to answer two questions for them. That's how they learned they were in the sunken city of Zak Saloth, and that the way back to the Castle was to the north. He also promised to answer more questions, if they gave him some books already.

To the north, they found a rough cave that sloped up steeply to west, and a ruined bakery with a massive drain pipe smashed through the roof. Raleigh elected to not search the bakery, because there was too much mold on the floor and she was afraid of triggering some yellow mold or equivalent. There was a brief discussion, and then they climbed the pipe.

They Did This To Themselves

The pipe eventually emptied out into a ruined temple, with large portions of the floor missing. They also saw a spiral staircase, some 70 yards away past the missing floors, which looked like the smaller staircase from the Castle catacombs - and indeed, they could see Thomas' ruined glowstick lying on one of the steps.

With the way home in sight, if not obviously accessible, the PCs turned to their other desire: treasure. Entirely without any prompting from me, they reasoned that priestly types bury their treasure beneath altars, and that therefore there was treasure in the stinking chapel to the south. Ryan was dispatched to investigate while everyone else took covering positions.

Ryan hadn't quite reached the altar when several lumps of garbage on the floor revealed themselves to be ghoulified pixies. A half-dozen or so 12" tall winged monsters took flight for Ryan, and while their claws failed to penetrate his armor, their icy cold touch start slowing him down (gave him a DX penalty).  Raleigh cast Explosive Thunder Ball and critically succeeded, and the pixie ghouls started screaming and advanced on the firing line. Guns were fired, to little effect (it's realistically hard to hit highly evasive small things that are moving fast) and Raleigh ended up spiking the Thunderball at her feet, counting on everyone's armor to protect them.

As it turned out, the PCs' armor mostly did protect them, but the knockback sent everyone flying and only Thomas remained on his feet. The pixie ghouls were knocked out of the air and badly injured enough to slow them down. Everyone started getting to their feet and shooting the pixies, but it turned out that they had good supernatural armor against bullets and were Unliving to boot, so even a blast of buckshot wasn't enough to stop them.

Still, they weren't dodging very well, and Kevin figured that it was mostly a mathematical exercise now: the PCs would hit every now and then, the pixies couldn't dodge, and the fight would be over. I responded that it was cute when the players thought like that.

At this point, it was late and Uhuk had already dropped the session. We broke for the night and planned to continue next week with more pixie antics.

The pixie ghouls were pretty easy to put together: take the Guard temple from DF15 Henchmen, apply the Pixie template from DF3 The Next Level, and add the Ghoul template from GURPS Horror and change the Paralysis Touch from a straight incapacitating condition to a layered DX penalty to make them less unfun to fight. Of course, that ended up with SM -6, ST 9, HP 10 pixies with DR 4 versus piercing and Injury Tolerance (Unliving), which made them surprisingly resistant to bullets. There was some talk of scaling bullet damage to the target's effective size, but I resisted that. Anyway, I was really pleased with how easy they were to stat and how dangerous they worked out to be. Kevin suggested them a few sessions ago (for reasons unknown) and I grabbed the idea and ran with it.

I gave Doug a Destiny Point for free because I forgot to roll his Danger Sense before springing the teleport trap last session. Ted pointed out that I should have given him a roll when they sent Ryan off to explore the chapel, but I disagreed: Doug wasn't in immediate danger at that point, Ryan was, and Danger Sense is pretty self-centered.

We continued to use the Decider concept. There was more explanation, and it worked out okay. I still had to prompt Kevin a couple of times, but at least there was someone to prompt.

We also continued to try to use the shot clock. My suggestion that the previous player be in charge of the clock was heartily accepted and completely ignored, so I started counting off whenever I felt a player was taking too long. We still need to work on that.

Next session will continue the fight with the pixies, and explain why the current set of pixie ghouls are numbered "ghouls 16-20". Also, a bunch of bad stuff will happen to the PCs, and they'll find some loot, if they're lucky. I'm really looking forward to it. 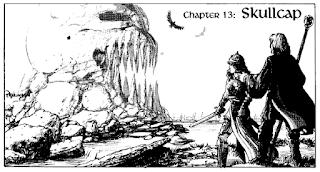 I'm a bit behind on my dungeon stocking: if Kevin had decided to descend the cliffs instead of looking for a way up, I would have been caught short. I know roughly what's down there, I just haven't statted and placed everything. Of course, there's the larger problem that there's three or four additional D&D modules worth of content down there, and a lot of it I haven't even started on. I mean, there's no way they're going to reach Skullcap or the floating castle in the next session, so I haven't done anything with them yet. But I will, soon.

Posted by Mark Langsdorf at 9:56 AM