Precis: Some house rules for GURPS Mass Combat, dealing with improving the quality of your troops through battle experience and merging existing experienced units with new hires to improve their experience.

GURPS Mass Combat is a reasonably comprehensive set of rules for running large scale battles in GURPS. It has rules for different types of troops with different levels of training and equipment, for raising new units and maintaining existing ones, and for fighting all different types of battles. One thing that is mostly missing are rules for improving the quality of existing troops as they gain battlefield experience.

There are two references to improving units: on 12, under Improvements, "The GM may allow troops to improve in quality... if events justify it," and on p 14, under Disbanding Elements, "For flavor, an element may be converted rather than disbanded." There's no real guidance for deciding when troops should improve in quality, and so I'm writing some house rules for New Dawn to provide some guidance. 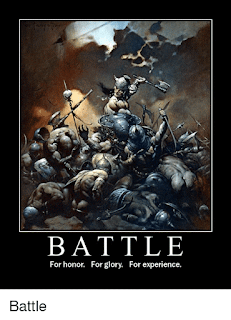 A unit can be retrained to lock in its experience and improve its troop quality by 1 step after earning 2 experience. Retraining takes one week per $10K of the difference in the raise costs of the improved troop and the unimproved troop. Units with more experience are cheaper to retrain: each extra point of experience reduces the cost by 20%, to a minimum of 0. The retraining time is based on the adjust cost, but can't be reduced below the lower of four weeks or the normal time to raise the unit. A unit cannot move or fight in any battles while it is being retrained, and if it moves or fights in a battle, an entire week of training needs to be redone.

A very experienced unit can improve its quality by multiple steps at once instead of reducing the cost of training. It takes 8 experience to raise the quality by two steps or 15 to raise it by three.

Troop quality is determined by training and culture and all new troops are raised at the appropriate quality level. If an army has created higher quality troops through battlefield experience, it may not be able to raise fresh units of the same quality to act as replacements. Adding lesser quality troops to a high quality unit generally lowers the quality of the high quality unit, but there are ways to get around it.

In general, if a unit gets has its size increased by more than 10% and the new troops are of a lower quality than the unit, the unit's quality drops to the average of the two quality levels: adding Average reinforcements to an Elite unit turns the entire unit into a Good unit. Any battle experience is lost. 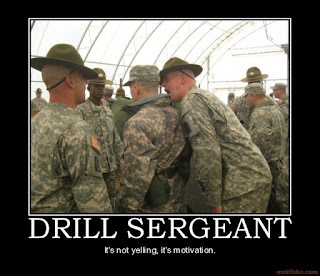 A high quality unit can be used as instructors to improve the quality of newly raised troops. Each element assigned to act as an instructor can train ten elements to its quality. Raising new elements with instructors has the normal cost of raising a new element of the appropriate quality. Instructors don't save money, they just allow veteran units to raise better units than a nation's normal training programs.

Elements acting as instructors cannot move or fight in any battles and must repeat the full week of training if they do move or fight in a battle. Elements in the process of being raised do not exist for mass combat purposes until their training is complete.

This is pretty straightforward and is really just a set of guidelines for things that Mass Combat allows with GM permission. The biggest departure from Mass Combat is clarifying that you can't just raise high quality replacements unless you could have raised those replacements normally.
Posted by Mark Langsdorf at 10:19 AM