So as I mentioned Friday, my Sentinels Tactics miniatures arrived and I've started painting them. And once again, I started by painting all the robots, armored suits, and golems first, because they're easy and quick.

I also started painting the core heroes and villains, but they're hard: three of them are wearing primarily white or crimson red, and my white paints are very thin and I don't have any crimson red. So I'm still working on them, but it's going a bit slower.

I prefer to work in with about 12 miniatures at a time: it's enough that I can usually put the same color on two or three figures at a go, but small enough that I can mostly remember everything. If I have a lot of time to paint, I can cycle through figures, painting color A on some of them, and then color B on others while color A dries, and then come back to the first set and paint a new color.

So to start, my preliminary figure: the Freedom 5 on the left, Baron Blade and Omnitron in the middle, and then Unity and her golems (robot versions of the Freedom 5) on the right. The figures have pegs on the bottom of their feet to mount onto clear bases, and I'm using sticky-tack and pennies to base them for now. Mostly - some of the golems are just lying down.

Close-ups of the three groups. 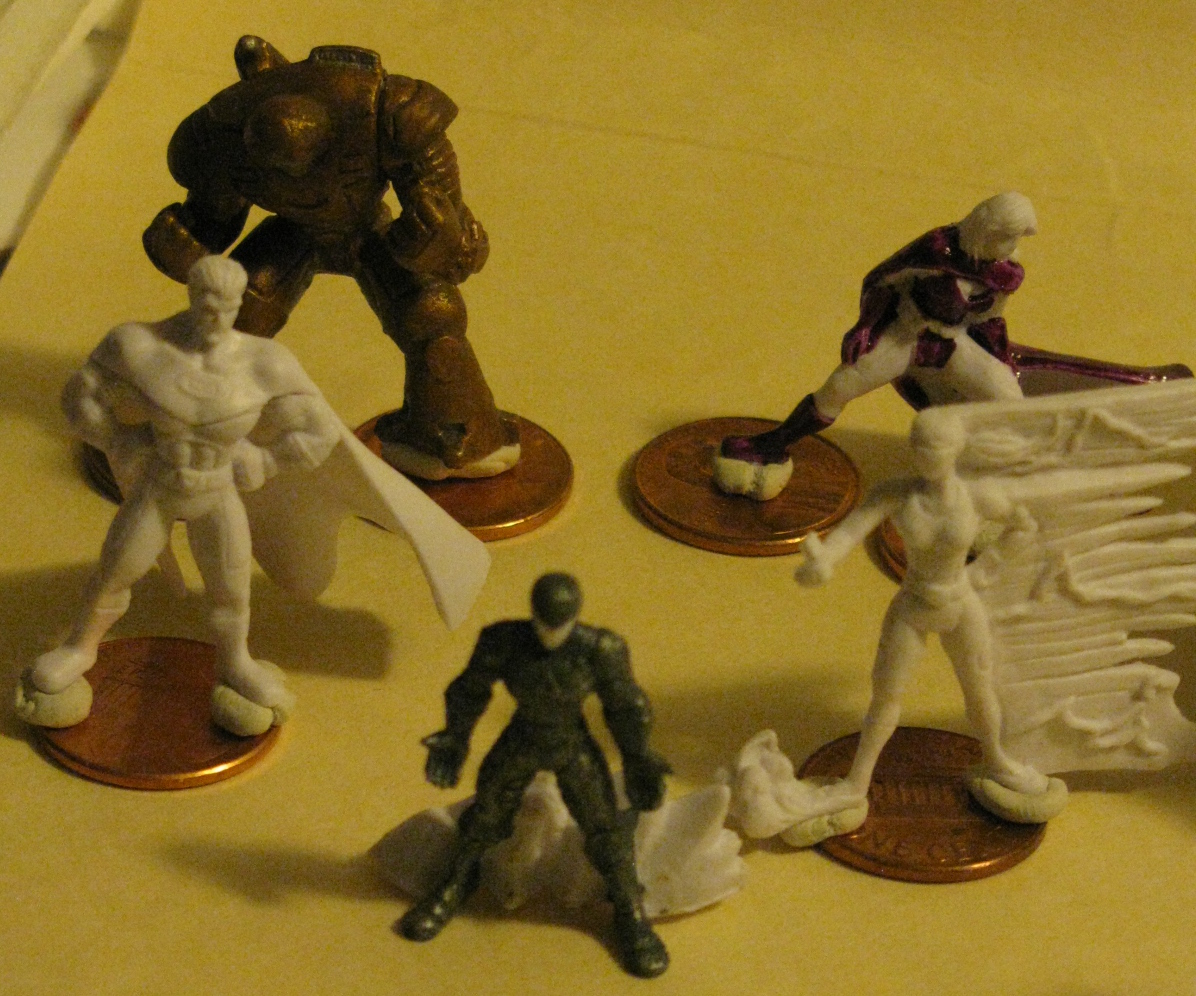 So as it worked out, the robots got finished first. Here's all the golems and robots.
Omni-tron, in the back, probably has the most complicated paint job: light blue carapace lined with pewter, dark blue legs and head with pewter joints. It's not showing up very well here, but there's a corrugated "neck" behind the head that's painted with a very dark grey and drybrushed with pewter. The underbody is the same dark grey, with some underchassis machinery drybrushed in pewter. The eye is "Firehawk", which Reaper's name for their orange-red paint.

Bunker and Absolute Zero. Bunker started with a medium brown base coat, a heavy drybrush with bronze, and some details picked out in pewter. Absolute Zero was painted in the same dark grey as Omni-tron and drybrushed lightly with pewter. The details of his insignia and his helmet face plate are sky blue. I painted the iceblock with the same sky blue, and then drybrushed pearl white and white to give it an acceptable looking ice effect. 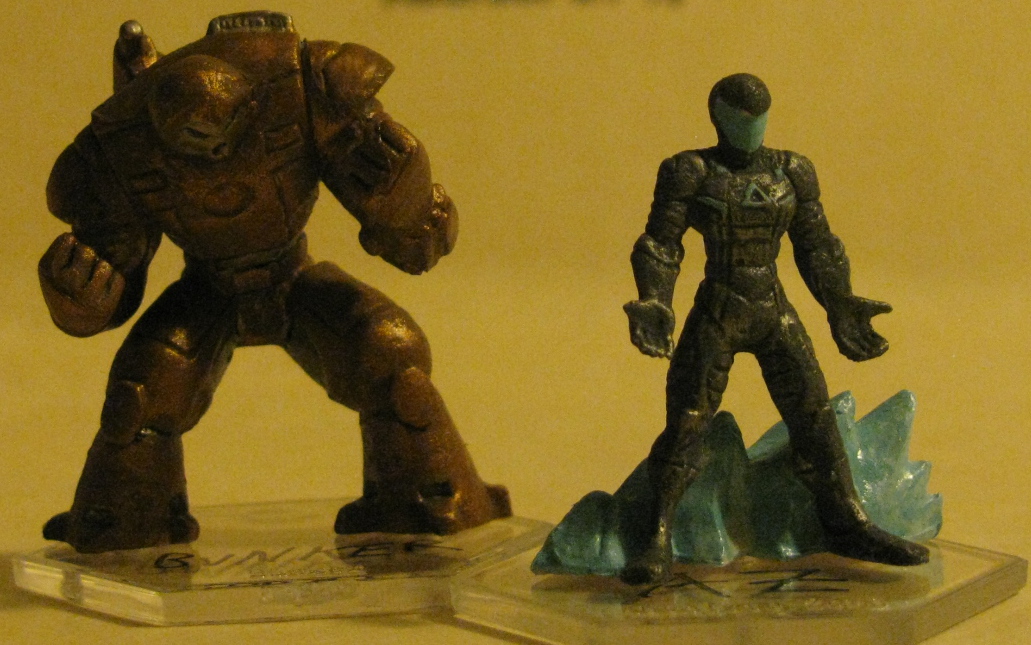 The golems were based in silver or pewter, and drybrushed very lightly. Mr. Chomps Raptor Bot was then painted with a ruby red ink to match the camouflage pattern on his card art and plushie doll. Cryo Bot's ice sculpture got the same paint treatment as AZ. Eyes and insignia were picked out with a medium purple, not that it comes out very well here except for Turret Bot's chest.

So not perfect by any means, but good enough. I still need to lacquer them to protect them, and then they'll be ready to play.

Although these figures are made from the same stuff as the Reaper Bones figures, I felt they were noticeably more hydrophobic when painting them. A lot of the paint beeded up as I was putting it down, especially on the various capes, Omitron's legs, and and stuff like that. A little patience and extra brush strokes was enough to overcome it, but it was much worse than the Reaper Bones. I washed the figures in soap before I started, but maybe I should have used a toothbrush to get some more agitation on the figures themselves.

Sentinel Tactics purists should be aware that I'm painting everyone with their Sentinels of Multiverse costumes, not their Sentinel Tactics costumes. Hence, Bunker is more yellow than silver, and Absolute Zero is onyx/obsidian/ebony looking instead of white. And when I get to Unity, she won't be hot pink!
Posted by Mark Langsdorf at 11:33 AM