When I started painted these figures, I realized I had a lot reds that were dark, or brick, or orange, but no solid fire engine red. And then I realized I didn't have a thick, solid white, nor a light grey to use as a base coat for a white drybrush.

I ordered some paints from Amazon, with promising names like "Menoth White Base" and "Menoth White Highlight". Which turned out to be taupe and cream, respectively. I also got a Khador Red Base, a Khador Red Highlight, a Heartfire, and a Bloodstone. You'd figure out of 4 reds, one of them would be crimson, but it turns out I got an orange, two new red-oranges, and a dark brick red.

All this for a bunch of figures that I wanted to paint in white, crimson red, and blue.

So I did my best, with what I had and what I got, and I'm not too happy with the results. And my camera wasn't particularly helpful either, refusing to focus, use the flash, or use the macro effect.

Two photos of the mad scientist Baron Blade and the villainous hunter Ambuscade. Blade suffers from having a lab coat that was original painted a very light blue and drybrushed white, and then overlayed with an off-white cream color. Blah. At the least the goggles came out okay. 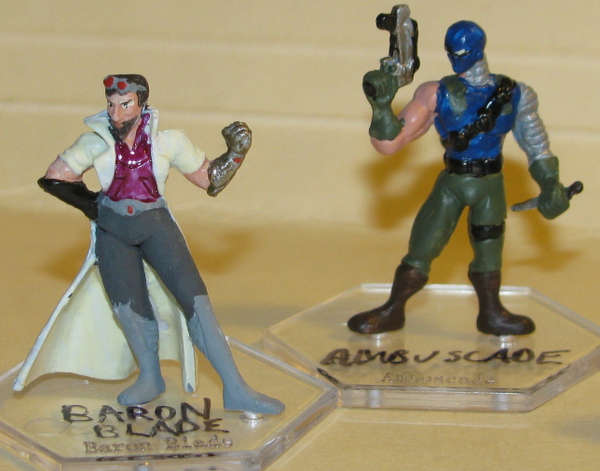 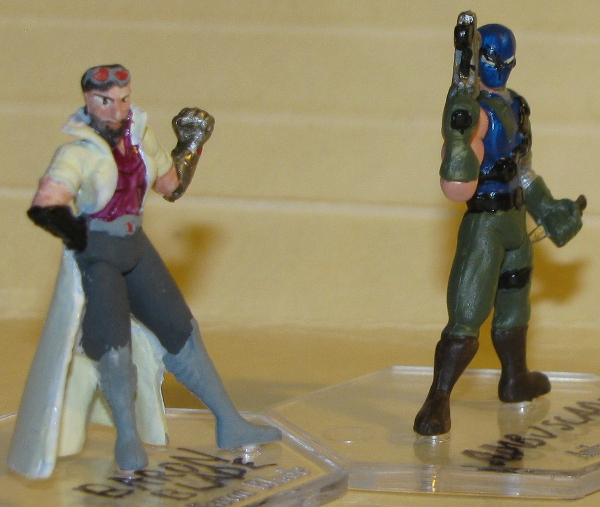 More of the Freedom Five. I hate, hate the sculpt for Tachyon. Speedsters are supposed to be running, not standing still. I get what the sculptors were trying for, but I just don't think it works.

The others mostly came out okay. There's some scale problems between Wraith, Legacy, and Unity, but that's not really my problem. 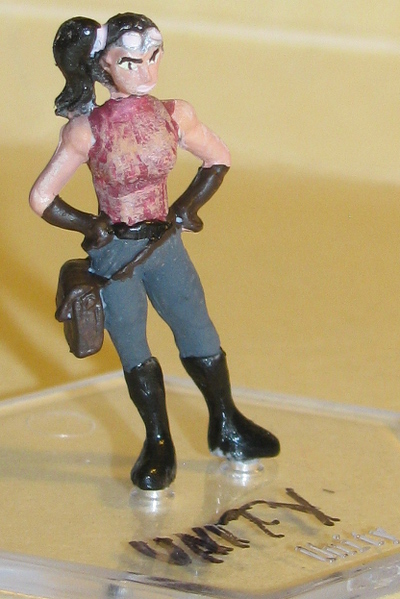 A close-up of Unity. The goggles didn't come out to badly, and the eyes and lips are about as good as I can get them. The shirt is meant to be a kind of dusky rose, and mostly looks it at a reasonable distance on the table top, but it doesn't work as well in a close-up.

As I may have mentioned, these figures are made from the same stuff as the Reaper Bones. But for whatever reason (inexperience?), the sculpts aren't as precise and there's less useful detail, especially on the faces. 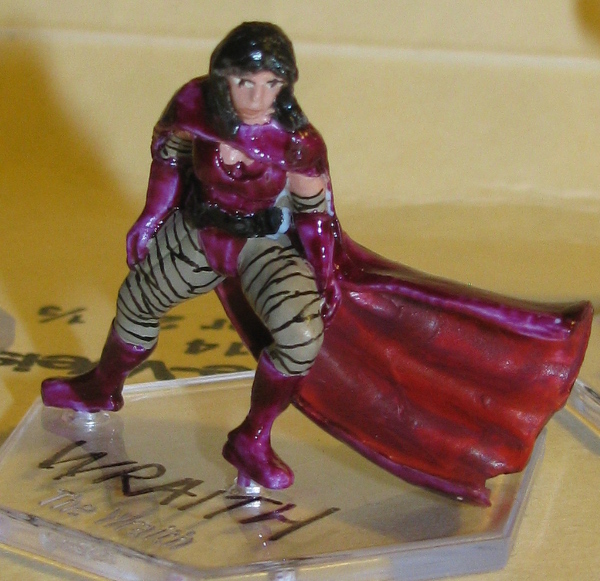 Wraith in close-up. I love my technical pen, and maybe over-use it, but it's nice to have control over something instead of the vagaries of my brush strokes.

Also, Blogger is not exactly the best platform for organizing a bunch of pictures like this. I'm spending a lot of time fighting with the interface, trying to get stuff to flow the way I want to. Which isn't news, but is still annoying.

Next week: more painting!
Posted by Mark Langsdorf at 4:51 PM